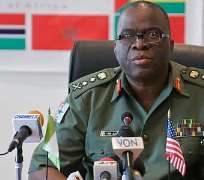 Security operatives Thursday seized 51 rocket launchers in a house in Barunde area of Gombe metropolis which was being used to manufacture rockets and improvised explosive devices (IEDs).

The News Agency of Nigeria (NAN) reported that the raid, carried out by State Security Service (SSS) personnel and the army, came a few hours after four persons were arrested with 60 explosive devices in another part of the city.

The Director of SSS in Gombe State, Mr. Bitrus Asha, who conducted journalists round the “factory”, said one man had been arrested in the house.

Other items recovered are detonators, remote control devices, different types of chemicals, six containers for preparation of IEDs and other items.

He advised people to report suspicious characters to security agents, adding that the SSS and other security agencies would reinforce the operation, which would be sustained.

Meanwhile, Borno State government and the Joint Task Force (JTF) Thursday blamed the residents of the state for the continued siege of Boko Haram on the state.

They said the non-provision of vital information that would lead to the arrest of the sect members was the reason why there was no end in sight to the insecurity of the state and by extension the entire nation.

The Deputy Governor of Borno State, Alhaji Zanna Mustapha, who was at the Monday Market, Maiduguri, where 11 persons were confirmed killed by the sect, said the only way to end the onslaught of the fundamentalists was by providing the right information that would lead to their arrest.

The deputy governor, who was at the market to commiserate with the traders, promised that the state government in collaboration with the security agencies would provide adequate security in and around the market.

He assured the families of those who lost their beloved ones that government would assist them in whatever capacity, and called on the general public to cooperate with the security agencies in providing information that would assist in arresting those who are terrorising innocent people in the state.

Mustapha added that without the people giving adequate information to the security agencies, government alone could not stop the rampant killings by the faceless group who are hiding under religion to cause mayhem.

He also directed the General Manager of the market, Alhaji Ajiya Terab, to sensitise all traders on the importance of giving information on suspected criminals in the market to the security agencies, particularly the JTF, promising that such information would be treated with confidentiality.

Also yesterday, the JTF came out to state that the battle to smoke out the fundamentalists was needlessly prolonged due to the uncooperative attitude of residents of Maiduguri.

The spokesman of the task force, Lt. Col. Sagir Musa, in a press release, said: "The JTF in Borno State has observed with concern the poor attitude of the public in Maiduguri metropolis to the issue of information sharing with security agencies.

"It is worrisome that Boko Haram terrorists are living in the same community with the people without requisite information that will assist the JTF in arresting them."

He warned that the task force would deal ruthlessly with anyone trying to disrupt the peace of the state especially during the Easter period and beyond.

Musa assured everyone of confidentiality of information given.

He said: "They need not fear for any information passed to the JTF will be treated with utmost confidentiality."

More facts have been provided on Wednesday’s attack on the Monday Market.

Terab said that 11 persons were killed, made up of nine Igbos and three Kanuri traders.

Musa had on Wednesday said that only one person was killed in the deadly attack, but his counterpart in the police was more lenient with the truth, insisting that seven persons were killed.

Terab, who conducted the deputy governor round the scene of the attack, stated that seven out of the 11 died at the spot, while the other four who were rushed to the hospital for treatment could not survive the gunshots.

Three of them also died before reaching the hospital, including Miss Amaka, who in the process of running to see her father who was shot dead, was also killed by the gunmen.

The GM told the deputy governor that gunmen numbering about 10 invaded the market with four of them carrying AK47s, while the others were in possession of pistols.

They started shooting at their targets without any confrontation from anyone despite the deployment of some security agents in the market.

On why the market was closed yesterday, he told the deputy governor that the management of the market had to close it for the moment in honour of the dead.