Signs You're Ready to Sleep Together 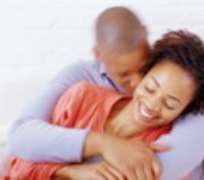 There are few moments as exciting - and terrifying - as the first time you get naked with someone new. For some of us, it's as early as the first date. For others, it comes after the walk down the aisle. But for most of us, it's somewhere in between. When exactly is up to you. Read on for the clues it's time to get closer.

First Time Tip-Off #1: It's exclusive.
For many, exclusivity is what gives the green light to getting busy. It makes the most sense from a health perspective - you should know (not just assume or hope) that you're the only person your sweetheart is swapping bodily fluids with. And sex is often more passionate and meaningful when you're secure in your relationship.

First Time Tip-Off #2: It's heating up.
We all use kissing as a barometer of whether or not you'll mesh in the sack. But for many, it also clues us in to when it's time to do the deed. Those first few smooches might have been generic, but after a few dates you start figuring out what works for both of you. And once your kisses can deliver that weak-in-the-knees feeling and the fireworks behind your eyes, you know it's time to take things further.

First Time Tip-Off #3: It's time to see if you're physically compatible.

Sex doesn't require a serious commitment for everyone. For plenty of folks, in fact, sex is an important way to figure out how much further they want this relationship to go. You wouldn't get serious about someone you lacked an intellectual or emotional connection to; you'll want to be just as sure you're sexually compatible before you get serious.

First Time Tip-Off #4: It's feeling comfy.
It's a big deal to bare all in front of someone new. That's why so many of us use our comfort level as a way to gauge if they're ready to go all the way. When you're no longer nervous shedding your clothes, you know you're in a relationship that's ready for the next level.