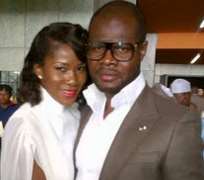 Preparations for Stephanie Okereke's April 21 wedding in Paris,France,have been intensified with the star actress and her fiancée processing travelling visas for the few friends and associates they are inviting.

We gathered that some of the celebrity couple's guests have booked interview appointments with French Embassy.

There are also top AGN officials and some other actors who are close to Stephanie,a recipients of the MFR national honour.

First received as mere speculation with no word of confirmation from Stephanie and Idahosa,it has now been officially confirmed that the wedding is on Saturday,April 21,2012,in far away Paris,France.

Although the couple are shying away from making public comments on the wedding,we can reveal that some of their guests have started booking interview appointments for their visas to celebrate with the very popular actress and filmmaker.

And not minding the fact that they have not received their prized invite,many(celebrities) are now rushing to the office of the French Consulate General(French Embassy) on Oyinkan Abayomi Drive,Ikoyi,Lagos for their visas.