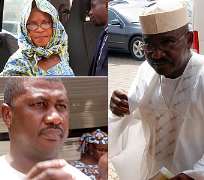 ABUJA, April 03, (THEWILL) - Six suspects who were on March 29 remanded at Kuje Prison in the much celebrated case of fraudulent management of police pension funds have been granted bail by an Abuja High Court.

A permanent secretary in the Federal Ministry of Niger Delta, Alhaji Atiku Abubakar kigo; his director, Chief Esai Dangabar; and four other top federal government workers accused of diverting N32.8B police pension fund were on Tuesday granted bail in the sum of N10m each and two sureties each in like sum.

As at the time of filing this report, the suspects had yet to meet the bail conditions and were temporarily returned to the prison until their fulfilment of the conditions.

Ruling on the bail application argued by Chief Adegboyega Awomolo (SAN), Justice Talba agreed that the court had discretion to admit the accused persons to bail.

He said that after weighing the balance of convenience, he arrived at the conclusion that the accused persons remain innocent until the prosecution succeeds in proving otherwise. Disagreeing with the EFCC counsel who had argued against the bail because investigations into the case were still ongoing, the judge held that it was a settled law that the accused persons were entitled to release on bail so that they could prepare themselves adequately for their trial.

Justice Talba said that with the arraignment of the accused in court and the filing of proof of evidence, it was presumed that investigation had been concluded and that fear of possible interference with investigation should be discountenanced.

Other suspects — Alhaji Ahmed Inuwa Wada, John Yakuku Yusufu, and Alhaji Habila Zira — were returned to Kuje Prison, save Mrs. Veronica Ulonma Onyegbula, the only woman of the lot, who was taken to Suleja Prison.

All six were arraigned on a 16-count charge of conspiracy, criminal breach of trust and diversion of public funds — offences contrary to sections 97, 315 Penal Code Act Laws of the Federal Capital Territory, Abuja Nigeria, 2007.

The breakdown of the charges indicate that the accused persons, being public officers in the service of the government of the federation between January 2009 and June 2011 in Abuja, diverted the sum of N14,518,567,724, which was part of police pension from an account domiciled at First Bank Plc.

Between January and December 2009 in Abuja, the accused persons were also alleged to have breached public trust with N8,920,371,822 police pension fund lodged at First Bank Plc.

They had all pleaded not guilty. The substantive case was adjourned till April 28 for hearing.