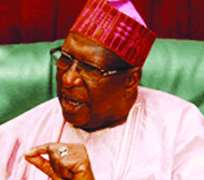 By guile and intrigues, the emergence of a new executive of the ruling Peoples Democratic Party (PDP) has finally laid to rest the power struggle among the competing interests. Last's Saturday national convention which brought up Bamagar Tukur as the National Chairman of the party was an anti-climax of the political maneuvering that had characterized the race since it was declared open.

Tukur emerged consensus leader of the party along some other national officers after a prolonged power play and intrigues between the President on one hand and the governors on the other. The stakeholders claimed that they went for the option of consensus arrangement to save the party from the usual acrimony that usually follows such a contest. In the end, the president had his way; the governors too had their way. It is a win-win situation for the two power blocks.

While the President had Tukur as his preferred choice, the governors won the battle to suspend plans to make Senators and members of the House of Representatives part of the National Executive Council (NEC). They also had one of their own, former Governor Olagunsoye Oyinlola, as the National Secretary.

Now that the deal is settled, the first challenge before the new leadership is obviously agenda setting. Tukur had stated in his campaign manifesto that his vision for seeking election into the office is to restore the glory of the party in line with the objectives of the founding fathers.

This, he promised to do, by bringing back into the fold all those who had left the party for one grievance or the other. He said, 'Now that I have the mandate to translate our dream for equity, I am going to ask all those who left the party to come back so that we can now rebuild the party together.' And he was not found wanting when he was asked the question of where to get the energy to accomplish the task. He simply went philosophical. 'What we need is idea, what we need is experience, what we need is ingenuity, what we need is someone with vision. I think these are the areas we should concern ourselves with whether I 'm 70 years or not. I am here to restore the party to the vision of the founding fathers which is to be a vehicle for social justice, to provide voice to all Nigeria,' Tukur said.

With that agenda setting, Nigerians are now looking forward to the way and manners the various factions that have been hurt by the consensus arrangement would be reconciled; how the party would ensure good governance, reclaim the lost states and possibly how to handle power contest for the 2015 without causing more damage to the party.

Reconciliation
Genuine reconciliation effort must start from Tukur's home state and indeed the entire North East geo-political zone of the country. As people often say, a prophet is not usually honoured in his home. This was exactly the case with Tukur. Not only that the states in the zone rejected his candidature and went ahead to elect Musa Babayo as their preferred candidate for the chairmanship position as against the president's endorsement at their zonal congress, his home state governor, Murtala Nyako of Adamawa also stood vehemently against his imposition. And as they say, charity begins at home.

Therefore, to provide the right leadership, reconciliation effort must start from the North East zone. Much more onerous than that, of course, is the challenge of resolving the apparent factionalization of the party at the various state levels. Literally, all the states under the control of the party are enmeshed in one crisis or the other. From South West to the South East, from South-South to North East, Northwest to North central, there are different competing power blocks with seemingly irreconcilable differences. In the ensuing power struggle, many of the founding members of the party have been sidelined, owing to the politics of exclusion by the governors.

Consequently, some of them have joined the opposition parties, while those still retaining their membership position of party are firing salvos from outside. In some cases, they work in concert with other parties to subvert the wish of the party. This partly accounted for the loss of some states to the opposition parties in the last election. To amicably resolve these crises, Tukur would need to bring his idea into play in the years ahead so that the party can regain its eminent position in the affected states.

Good governance
As a ruling party controlling majority of the states in the country, the primary responsibility of the new leadership should be how to manage the affairs of the party in a way that would ensure good governance. At present, the PDP controls 25 out of the 36 states of the federation. In view of the circumstance that thrust him up as preferred candidate of President Goodluck Jonathan, there is the fear that the governors of these states may gang up against him at a critical moment of his leadership.

Apart from that, the northern political elders are apparently unhappy with the present power structure, especially the fallout of the controversies of zoning arrangement. Therefore, the main challenge now is how to strike a balance among the competing interests. And in doing so, Tukur should be able to find a way to assuage the feeling of the North so that peace can return to the country in the overall interest of the welfare of the citizenry. Nigeria is in dire need of good leadership who could lead the country out of the present doldrums.

Taming the governors
Whether or not anybody likes it, state governors have constituted themselves to a powerful bloc in the polity. And to that extent, they have always determined who gets what in the sharing of positions within their respective parties and the nation at large. The experience in the last convention is another testimony of the rising influence of the governors.

The question now is: how would Tukur tame these governors? When the former Chairman, Okwesilieze Nwodo came on board, he had a similar vision to reposition the party but little did he know the limit of his power. So, when he decided to introduce e-registration to the party, the governors ganged up against him and saw to it that he did not last the tenure. Accordingly, he fell to the proverbial banana peel. Now, having won the battle to whittle down their influence through a review of the party's constitution, they can still do and undo. Will they allow Tukur to achieve his dream? Answer to this question is in the womb of time.

Reclaiming lost states
The declining fortune of the party in some states, especially the states in the South West has been a major source of worry to the concerned stakeholders. There is the insinuation that the emergence of Oyinlola as the National Secretary of the party is part of the strategic plan to reclaim the South West in the next election. Oyinlola is a loyalist of former President Olusegun Obasanjo. He was said to have propped him up in preference to Ebenezer Babatope who had earlier been touted as the possible candidate for the position.

The belief is that he would be able to use his political clout to checkmate the rising profile of the ACN in the South West. But to achieve this end, the leadership must first and foremost go back to the drawing board and reconcile the various warring factions in Ekiti, Ogun, Oyo, and Lagos and Osun States. At different times in the past, all reconciliation committees set at different times in the past to forge a common unity among the members met brick walls. Anambra, Imo and Nasarawa states, among others, also have their peculiar challenges which must be addressed before the next election, if they are really desirous of reclaiming the states.

2015 power game
In politics, as soon as one election is over, preparation for the next one starts almost immediately. The belief in most quarters is that the President's preference to Tukur as the National Chairman is to neutralize the influence of former Vice President Atiku Abubakar in the North ahead of the 2015 presidential election. The North is already angling for power shift in 2015. At the same time, some people are already flying the kite for Jonathan's second term bid. Rumours are rife that emergence of Tukur is to provide the needed support for his ambition ahead of 2015. This is going to be a test case for the unity of the party. And obviously, how maturely the matter is handled when the time comes will determine the continued survival of PDP as dominant party in Nigeria.

Internal democracy
One major criticism against the PDP is its lack of internal democracy and flagrant disregard for the rule of law. Since the goal of the new leadership is to rebuild people's confidence, any reform initiative must start with entrenchment of genuine principle of internal democracy and respect for the rule of law. Whether or not Tukur is in a position to engineer the desired changes is now a question begging for an answer. As it is often said, 'he who must come to equity must come with a clean hand.'