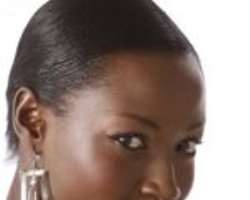 Twenty-three-year-old Kate Tachie-Menson is the new Face of Africa. She won the continental models title and a $50,000 cash prize at the spectacular final held last Saturday in Sun City, South Africa.

“I'm so happy, I don't know what to say”, Kate told a  media conference soon after the contest. “I will depend on all of you to continue to support me to achieve my dream of becoming a super model,” she said.

Kate snapped the ultimate prize, which also includes a three-year contract with Oluchi Onweagba's company, from among nine other contestants, who made up the top 10 at the final show.

The dramatic 90-minute show, featuring performances from Idols winner, Eric Moyo, Nigerian Naeto C and Ikechukwu, was screened live on DStv to over 40 countries across the continent.

The final show featured some of Africa's most creative fashion designers — Ben & Bee from Ghana, Mustapha Hassanali from Tanzania, Thula Sindi from South Africa and Lisa Folawiyo from Nigeria.

Kate's win has been described as a fairytale finish by the Face of Africa organisers, MNET. She had auditioned for the 2006 edition in Accra but did not qualify at the time because she needed to hone her talent and work on developing her physique. This year, she auditioned again and went through all the stages of the competition to become the MNET Face of Africa.

According to Oluchi, who was the first MNET Face of Africa and also a member of this year's judging panel, “it was clear to us all that Kate was perfectly suited to be the next Face of Africa.

She's the complete package, a model designer's dream of, one that magazine editors embrace and catwalks are made for. Kate won the title purely on merit and the fact that she had this fairytale story, this incredible journey to the top, makes it just that little bit sweeter!”