A Cure For AIDS Found? 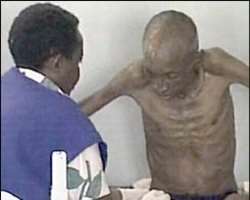 OVER THE years orthodox medical doctors, traditional medicine practitioners and researchers worldwide have fruitlessly tried to find a common cure for the Human Immunodeficiency Virus (HIV), the virus that causes AIDS.

Today, AIDS claims as many as 2 million lives every year with 33 million people infected worldwide.

In Ghana alone several thousands of people have died through the pandemic with many more on admission at the various hospitals in the country.

These and many other reasons have compelled both local and international stakeholders to intensify efforts at reducing the rate of new HIV infections.

The following article, sourced from the Associated Press news organisation would make interesting reading as far as the search for the cure for AIDS is concerned. Read on:

An American man who suffered from AIDS appears to have been cured of the disease 20 months after receiving a targeted bone marrow transplant normally used to fight leukemia, his doctors have confirmed.

While researchers and the doctors themselves caution that the case might be no more than a fluke, others say it may inspire a greater interest in gene therapy to fight the disease.

Dr. Gero Huetter said his 42-year-old patient, an American living in Berlin who was not identified, had been infected with the AIDS virus for more than a decade, but 20 months after undergoing a transplant of genetically selected bone marrow, he no longer shows signs of carrying the virus.

"We waited everyday for a bad reading," Huetter said. It has not come.

Researchers at Berlin's Charite Hospital and Medical School say tests on his bone marrow, blood and other organ tissues have all been clean.

However, Dr. Andrew Badley, director of the HIV and immunology research lab at the Mayo Clinic in Rochester, Minn. said those tests have probably not been extensive enough.

"A lot more scrutiny from a lot of different biological samples would be required to say it's not present," Badley said.

This is not the first time marrow transplants have been attempted for treating AIDS or HIV infection. In 1999, an article in the journal Medical Hypotheses reviewed the results of 32 attempts reported between 1982 and 1996. In two cases, HIV was apparently eradicated, the review reported.

Huetter's patient was under treatment at Charite for both AIDS and leukemia, which developed unrelated to HIV.

As Huetter, a Hematologist, prepared to treat the patient's leukemia with a bone marrow transplant, he recalled that some people carry a genetic mutation that seems to make them resistant to HIV infection. If the mutation, called Delta 32, is inherited from both parents, it prevents HIV from attaching itself to cells by blocking CCR5, a receptor that acts as a kind of gateway.

"I read it in 1996, coincidentally," Huetter told reporters at the medical school. "I remembered it and thought it might work."

Roughly one in 1,000 Europeans and Americans have inherited the mutation from both parents, and Huetter set out to find one such person among donors that matched the patient's marrow type. Out of a pool of 80 suitable donors, the 61st person tested, carried the proper mutation.

Before the transplant, the patient endured powerful drugs and radiation to kill off his own infected bone marrow cells and disable his immune system, a treatment fatal to between 20 and 30 percent of recipients.

He was also taken off the potent drugs used to treat his AIDS.

Huetter's team feared that the drugs might interfere with the new marrow cells' survival. They risked lowering his defenses in the hopes that the new mutated cells would reject the virus on their own.

Anthony Fauci, director of the National Institute of Allergy and Infectious Diseases in the US said the procedure was too costly and too dangerous to employ as a first line cure. But he said it could inspire researchers to pursue gene therapy as a means to block or suppress HIV.

"It helps prove the concept that if somehow you can block the expression of CCR5 by gene therapy, you might be able to inhibit the ability of the virus to replicate," Fauci said.

David Roth, a professor of epidemiology and international public health at the London School of Hygiene and Tropical Medicine said gene therapy, as cheap and effective as current drug treatments, is in very early stages of development.

"That's a long way down the line because there may be other negative things that go with that mutation that we don't know about."

Even for the patient in Berlin, the lack of a clear understanding of exactly why his AIDS has disappeared means his future is far from certain. "The virus is wily," Huetter said. "There could always be resurgence."