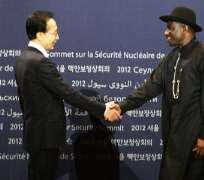 Mr President
Let me start by expressing my profound appreciation to our host, President Lee Myung-bak, for hosting the Second Nuclear Security Summit and for the warm hospitality accorded me and my delegation. It is important to note that this Summit is holding at a time nuclear security is demonstrating to be a major issue of global concern which needs concerted and cooperative efforts of all countries to contain.

Permit me to also pay tribute to President Barrack Obama for organizing the first Nuclear Security Summit in Washington D.C. in 2010. The Summit succeeded in establishing a common understanding of the security threat posed by proliferation of nuclear agents, the fear of the use of same by terrorists and the urgent need to secure and prevent access by unauthorized persons to nuclear materials. The timing of this Summit would not have come at a better time than now when myriad of problems are still prevalent in our world, and for which many non-state groups, unfortunately, are abandoning dialogue anchored on acceptable peaceful conflict resolution measures, to resolve local, national or regional conflicts, have tended to increase the tempo of use of means which at times favour terrorism to achieve desired objectives.

In ensuring global security of nuclear materials and the prevention of the spread of sensitive nuclear technology, legitimate developmental aspirations of countries should be supported by the deployment of peaceful nuclear technology. It is thus my expectation that the issues for discussion at this Summit should include building partnership between nuclear technology supplier countries and developing countries aspiring to deploy nuclear energy for peaceful purposes. This should be done without loosing the firm commitment to the implementation of strategies and mechanisms to safeguard nuclear materials.

One unfortunate but fundamental development since the Washington Summit was the Fukushima-Daiichi nuclear accident occasioned by the earthquake and tsunamis that hit that country in 2010. I congratulate the government and people of Japan on the success recorded in containing the tragic incident. The collaboration between IAEA and Japan in handling that accident is commendable. The tragic incident has brought to the fore the necessity of nuclear safety in the application of nuclear technology. As for Nigeria, we are doing our best to ensure that adequate safety measures are employed as we introduce nuclear energy into our energy mix.

Mr President, I wish to assure this august gathering that Nigeria has remained manifestly committed to compliance with international legal and regulatory requirements for safety, security and safeguards in the use of nuclear energy. Our commitment is unwavering; as it would be recalled that Nigeria was the second country to sign the Non-Proliferation Treaty in 1968 and voted for its indefinite extension in 1995. Nigeria also signed the Comprehensive Safeguards Agreement in 1998 and ratified the Convention on Early Notification of a Nuclear Accident in 1990. Furthermore, in preparation for the introduction of nuclear power in the country, Nigeria has ratified all relevant international treaties and conventions.

In support of the Programme of Action of the Washington Nuclear Security Summit and the UN Security Council Resolution 1540, Nigeria has undertaken a number of actions to complement global efforts. Some of the issues so far pursued include:

Accelerated efforts in partnership with the United States, China and the IAEA to convert the highly enriched uranium (HEU) research reactor in Nigeria to low enriched uranium (LEU) as a means of reducing threats for theft of fissile materials by potential rogue groups;

Organized sub-regional workshop for ECOWAS Ambassadors in April 2011 to seek support for the Nuclear Security Summit initiative and to sensitize the governments on common nuclear security problems within the sub-region as well as the template of regional approach that would reduce vulnerability to incidents of nuclear materials reaching the hands of non-state actors likely to use same for terrorist operations;

The efforts of networking with the ECOWAS community was further enhanced during the 55th General Conference of the IAEA in September 2011 when Nigeria organized a side-event for experts from ECOWAS countries to fine-tune the outcome of the Abuja meeting as well as mobilize support for the 2012 Seoul Summit;

At the end of the Conference, the experts agreed to network among themselves and the need for collective border control, information-sharing among the security agencies in the sub-region as well as the sensitization and education of the populace. The enhancement of government control of nuclear materials as well as the training and re-training of security personnel were also broached;

Development in partnership with the IAEA and other international expert institutions, the institutional mechanism to enhance the training of national security agencies so that they are able to respond better in understanding the challenges of nuclear security threats as well as planning adequate system for tracking and containing these range of problems. A national institute for Nuclear Security training is being established in Abuja, to provide human capacity development, which could support the African region.

Mr President, in conclusion, I would like to assure this meeting of my country’s unflinching support for all multi-lateral efforts aimed at nipping the menace of nuclear terrorism in the bud. As a country, we are desirous of the application of nuclear technology for peaceful purposes only. We are committed to the achievement of a world free of nuclear weapons and we would continue to work assiduously with like-minded countries to achieve that goal. In this regard, we wish to reaffirm our commitment to the amended Convention on Physical Protection on Nuclear Materials and also to pledge our preparedness to sign the International Convention on Suppression of Acts of Nuclear Terrorism.