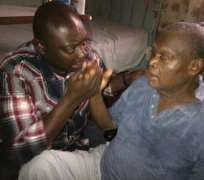 That actor Enebeli Elebuwa has been on sick bed in the past six months is no longer news.

The actor who fell sick in 2011 was first taken to Military Hospital Yaba,from there his family started seeking the attention of traditional doctors and he was later asked to return to his residence in Lagos.

Since then,nothing concrete has been heard about Mr. Enebuwa's health till now.

Nevertheless, we reliably gathered that the sick actor in the past three months has been receiving herbal treatment from a traditional doctor called Ugoma.

As gathered,the traditional medicine man (native doctor) who was consulted by AGN executive members and the actor's family insisted that he will do everything possible to ensure that Mr. Elebuwa will be free from bondage of stroke.

After three months of unsuccessful attempts to bring the sick man back to normal,Mr. Ugoma disclosed his interest for Mr. Elebuwa to be moved back to his home town in Delta State,where he will commence his treatment.

He alleged that Mr. Elebuwa's wife is behind his noncompliance to treatment and wants the sick man to leave Lagos and join his brothers and sisters at home who will take proper care of him and administer his medicine as prescribed.

I have concluded with the man two days ago and we agreed that he will go back home.

The man cannot recover in his house here in Lagos,because his wife doesn't want him to recover. I don't know what is wrong with her,she fails to give him medicine and administer all herbs as prescribed by me.

After giving her instructions on what to do,she will abandon the drugs and tell him that God will do everything.I am sure that she doesn't want the man to recover.

I became worried because I have handled issues tougher than that of Enebeli and the person recovered.So,I decided to discuss the matter with Enebeli's brothers who are in the village,they ordered that he should be brought back home and continue with his medicine.

We agreed that he will leave Delta State today and I will be sending his medicines across to him.He has to go home and every other treatment will continue from there. Mr. Ugoma stated.

Meanwhile,an insider source revealed that actors and actresses deserted their sick colleague since he left.