Nollywood Stars, Pawpaw, Laide Bakare, Others In Prison For Lamboginny 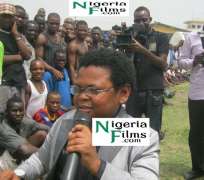 It was a unusual atmosphere yesterday, Friday, March 23 at the Ikoyi Prison when top Nigerian celebrities stormed the premises of Ikoyi Prison located inside Nigeria Prison Service, Ikoyi, Lagos.

A rowdy but joyous shout rented the air as each of the celebs breezed in. Osita Iheme, who is well known as Pawpaw, one half of Aki, turned the prison premises into something else when he came in.

About 30 inmates were freed yesterday with the support of Nigerian singer, Lamboginny, who is a prison warden, and some of his friends in an event tagged Freedom For Helpless Inmates.

The high point of the event was when the freed inmates were called and re-integrated into the society by the celebs. An un-freed inmate identified as Nokia, who is a fuji artiste got a recording contract deal courtesy Dede Mabiaku.

He also promised to provide the prisoners good toilet facilities, change and provide their mattresses, plates, and also visit them regularly to make life meaningful to them.

The event, which was well supported by Nollywoodgists.com, largely turned out to be a success, especially with the joy it brought to the prisoners.