Flaxseeds: A Food for Life 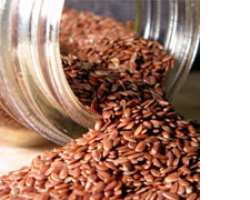 "Wherever flaxseed becomes a regular food item among the people, there will be better health", said Mahatma Gandhi. He was right. The true nature of flax as a health food has been known for centuries. In the 8th Century, Charlemagne considered flax so essential for health that he actually passed laws requiring its use. Flax was one of the original medicines, used by Hippocrates himself.

Flaxseeds and flaxseed oil are one of the best sources on the planet for the important omega-3 fatty acid called alpha-linolenic acid. Alpha-linolenic acid (ALA) is considered an essential fatty acid because the body can't make it -- it has to be obtained from the diet. Flaxseed oil can help protect against cardiovascular disease, cancer, arthritis, and many other degenerative diseases. And though it's primarily a source of omega-3, the oil has the virtue of containing some other fatty acids as well, notably some omega-6's and some heart healthy omega-9's, providing a nice fatty acid balance.

There is a caveat on this, however. The ALA found in flax and flax oil is only one of three omega-3 fats, the other two being the long-chain fatty acids known as DHA (docosahexaenoic acid) and EPA (eicosapentaenoic acid). The latter two are only found for the most part in animal foods particularly cold water fish like salmon.

Truth be told, they're the superstars of the omega-3 family, though the ALA in flax has plenty of health benefits as well (such as being anti-inflammatory). The good news is that the body can make DHA and EPA from the ALA in flax; the bad news is that it does a really bad job of it, converting only about 5-10% of the ALA to those longer chain omegas that are found naturally in fish and fish oil.

What to do, what to do? Flaxseed and flaxseed oil are the go-to source for omega-3's if you're a vegetarian. And if you want to get the special benefits of EPA and DHA without taking fish oil (or eating fish), just make sure to take at least a tablespoon a day of flaxseed oil. That way, even at the low "conversion" rate you'll still be getting about a gram or so of the "fish oil" omegas.

The benefits of flax are not limited to the omega-3 content -- not by a long shot. The oil, and especially the seeds, is a great source of something called lignans which have a whole host of health benefits of their own. Lignans have a protective effect against cancer -- especially those that are hormone-sensitive like breast, uterine, and prostate cancer.

The effect of flaxseed lignans on breast cancer cells has been the subject of a fair amount of positive research. In one study,1 flaxseed was shown to have the potential to reduce tumor growth in patients with breast cancer.

In this study, patients consumed a muffin with 25 grams of flaxseed (or a "placebo" muffin of the same size without the added flaxseed). The researchers noted that daily intake of 25 g flaxseed (about 3-4 tablespoons) can significantly reduce cell proliferation and increase apoptosis (cell death of cancer cells). The flaxseed also reduced HER2, a protein that increases the aggressiveness of breast cancer.

Researchers have also found that lignans inhibited the growth of human prostate cancer cells in a test tube. Research at Duke University2 showed that men with prostate cancer who were given 3 tablespoons of flaxseed per day and a low fat diet had decreased cancer cell growth. And lignans intefere with the production of a nasty testosterone metabolite (DHT, dihydrotestosterone) which is partly responsible for hair loss and benign prostate hyperplasia (the condition that makes men over 40 have to go to the bathroom a lot at night).

Flax promotes cardiovascular and colon health, can boost immunity, nourishes your skin, and helps stabilize blood sugar. Because the lignans in flax are actually phytoestrogens (weak estrogenic compounds from plants), they may help relieve menopausal symptoms. In fact, in one study, flaxseed was as effective as hormone replacement therapy in reducing mild menopausal symptoms in menopausal women.3

The flaxseeds, but obviously not the oil, also contain another huge benefit: soluble fiber. You get all the goodies of the oil plus the fiber, when you eat the seeds. They're ideal for baking, for sprinkling on salads, and for adding to cereals and smoothies -- but you need to break the hard outer coating, because the whole seeds can't be digested.

What to Look For

Barlean's Organic Oils --the nation's top producer of high quality flaxseed products -- makes a terrific product called Forti-Flax, which you can use right out of the jar without having to do any grinding. Four tablespoons of Forti-Flax will give you 6 grams of fiber, 3 grams of omega-3's, and a host of lignans and other beneficial phytochemicals -- as well as provide the same amount of flaxseed used in the above-mentioned breast cancer study. And in addition to all the other good stuff, flaxseeds are also anti-inflammatory and have antioxidant properties as well.

Some high quality flaxseed oils like Barlean's Lignan Flax Oil have been cold-processed to retain an especially high lignan content. They can be found in the refrigerated section of your health food store. And remember to never cook with the oil -- cooking damages the delicate omega-3 fats which don't stand up to heat at all. Just keep your flax oil in the fridge and take it as a supplement or use it on salads or already cooked vegetables.

Note: Dr. Bowden is a nationally known expert on weight loss, nutrition and health. He's a board certified nutrition specialist with a Master's degree in psychology and the author of five books including The 150 Healthiest Foods on Earth. His latest book is The Most Effective Cures on Earth.