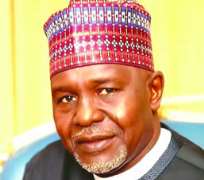 Bunu
Former Minister  of the Federal Capital Territory  and aspirant for the exalted position of national chairman of the Peoples' Democratic Party, Architect Ibrahim Bunu  has declared that no law of the party would be breached, if President Goodluck Jonathan decides to back any of the contenders for the office.

Speaking against the backdrop of speculation that President Jonathan has anointed former governor of old Gongola State, Alhaji Bamanga Tukur for the office, ahead of the national convention, Architect Bunu submitted  that the President would be abdicating responsibility, if he shows indifference towards who emerges as national chairman of the party.

Excerpts
There is a report of the possibility of a consensus candidate, anointed by the President . What  is your take on this?

Thank you very much. I went out, seeking for this election, believing very sincerely that I am competent, I am qualified, I am a party man through and through and therefore, I am the most suitable candidate.

That's my believe. And when they are considering options I believe I am one of the options. I  have no quarrel, whatsoever with the president indicating interest, because he is going to work with the chairman very closely. If he doesn't indicate interest he must be abdicating from his responsibility. So, I believe he should indicate interest. But my prayer and my hope is that those who will help the president in arriving at  a decision should tell him the truth about the various candidates, so that the president would now indicate an informed interest, because there are cases of people who tend to misinform others about the abilities and competencies of the various aspirants.

Apart from this, if it is the choice and decision of the party that a consensus candidate is found or a dialogue is held among the stakeholders of the party to minimize the friction  and laborious process of direct primaries or election at the convention, as a loyal party man I am willing to go with it. I am only praying that it should be the yardstick in measuring  the consensus candidate.

Will it be fair, if  some, or all the candidates aren't involved in the process of selecting the consensus candidate?

You see, when candidates are invited in isolation, I wouldn't believe those behind the endorsement- probably there are other issues that may be discussed and I believe that if a consensus is to be credible, it can be without any of the candidate or with all the candidates, because they all know the candidates,  we all filled the forms, we all exist as party men, most of us  for the last thirteen years  as PDP men, especially  those  of us who started with the party from the beginning; they know what we can do and cannot do.

So, they don't need to invite us physically to  hold discussions on our eligibility, the only thing I would say about yardstick is that the leaders should remember the problem within the party, leaders should remember the challenges confronting PDP and if they know that the problems and challenges facing the country require a very strong, loyal party man if PDP today cannot give government a very strong backing to correct the weak areas of the country, to support the government to move forward, I don't think there is another party that can do that.

But in order to  enable PDP to take up these challenges, the stakeholders need a very competent, hardworking, a straightforward person, a person who isn't carrying any baggage of self interest, a person who has no personal agenda, who is committed to the transformation of the party  and the transformation programme of the Federal Government. These are the yardstick I want.

Talking about consensus, as one of the aspirants can you confirm to usefforts to arrive at that and what are those efforts?

There are discussions about consensus it isn't the only topic on the table. The need to arrive at consensus arose from the large number of aspirants that are contesting for the post; if you put all the aspirants for one office at the convention, it will be rowdy and if you start to reduce the number maybe it will help us to conclude the process with ease; to that extent,  there have been discussions at different levels  on this  consensus.

I have not  been officially invited to any of these, but in the process of my making contacts and campaigns, I have come across leaders who indicated to me that there are discussions going on. That's the much I know about consensus.

One of the aspirants, Alhaji Bamanga Tukur was reported to have said that the chairmanship has been thrown open…. [cuts in] since I started this campaign, I have refused to respond to anybody's comments and especially on this contest and Alhaji Bamanga Tukur is an elderly person, much older than I am and in our tradition in Africa, particularly in Nigeria we revere our leaders. If you ask me, what is my position about consensus or open election I can do that.

But may we know your position on consensus?
I am indifferent, provided, either of it is conducted with decorum. PDP  has problem of internal democracy. Most members of PDP left the party: the governor of Nasarawa and Imo states were in PDP, before they left. Many have left.

Yes, we have challenges of internal democracy as a result of which when candidates lose primaries, they find alternative platforms to contest elections. This shortfall in our democratic process was as a result of  lack of discipline. I don't want to say, whether this was from the national secretariat or state secretariat, or even the members themselves. But there are issues and problems associated with our party primaries, after which a lot of people got very dissatisfied with the process and it has affected  the party.

I believe this is one of the areas which I want to address, if I am elected chairman. Evolutionary problems are common to any organization; they may vary  in nature, but once  an organization is growing it is often confronted with natural growth challenges. In PDP these challenges aren't managed very well.

Secondly,  because of the successes we achieved  at the onset in 1999 and others associated with the success entitlement started to discourage and even frustrate a lot of the founding members  which degenerated to decamping and such associated extreme reactions by party members.

I believe that knowing a problem is halfway towards solving them  and we admit that we have challenges and we would subject such challenges to very open discussion and invite those of our members, founding members and other stakeholders within the party to proffer solutions and administer such solutions very fairly.

Internal democracy isn't a perfect position to achieve. Once you have a guideline, once you are disciplined enough to follow the guidelines to the letter, once you don't double  standard your principle, you will  achieve success.

So, if convention takes decisions, who else can vet or adjudicate over the decisions of the convention? This was the argument presented at the NEC and the NEC accepted that, yes, after convention there should be no other organ.

But the concern is, where do you seek redress, if you believe that you are wrongly screened out?

Yes, this screening isn't in the guidelines, it wasn't discussed at the NEC meeting, because it was for you to qualify or not qualify.

They cannot just rule out Mr. 'X', they will tell you what informed the judgment that led to your disqualification. This is the highest level of the contest and I don't believe that the screening committee set up to do this job would  do any shoddy job. I believe that they would be sincere and they would be open, they would involve the people concerned if they are delisting anybody, the reason being… already there are complaints about the party, about some highhandedness, here and there some exclusion here and there. All these problems are worrying every member of the party more so at the NWC level.

So, I don't think they would want to do anything that will worsen our present level of concern.

There have been concerns that certain members of the NWC who are also aspirants are yet to resign from their positions.  Aren't you worried that they aren't supposed to sit on judgment where they are involved?

Normally, in the guidelines of the party in the previous congresses there is provision for such withdrawal, people who are our members, elected into various offices and contesting for elections they did that before they contest. This time, it hasn't happened and truly I don't know what was the position of NEC, as it affects the convention,  because all the ward chairmen who wanted to contest, are also custodians of the documents; the same thing for the local government chairmen, but electoral officers were trained to conduct it.

I don't know why this is different; I have not  attended every meeting of the NEC in the last one year; there were six meetings, I attended four maybe two of this six, they discussed this matter, I cannot remember.