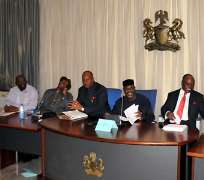 CALABAR, March 14, (THEWILL) – Governors of the South – South States mainly in Nigeria’s oil-rich Niger Delta Region have reaffirmed their support for the position of Nigerian Governors Forum (NGF) that the revenue allocation formula be reviewed to give more money to states and local governments as well as giving more powers and responsibilities to the constituent states for rapid development.

This was contained in a communiqué released by the governors after the first ordinary session of the Bayelsa, Rivers, Akwa Ibom, Cross River, Edo and Delta (BRACED) Commission Governors Council 2012 held in Calabar which was presided over by its Chairman, Governor Liyel Imoke of Cross River State.


On the matter of derivation and revenue sharing formula, they regretted the attempt to link the increasing insecurity in parts of the country to the issue of 13 percent derivation and considered it unfortunate and misplaced.

They insisted that on the contrary the issue to be addressed are the environmental degradation and pollution in the Niger Delta occasioned by oil exploitation which has adversely affected fishing and farming activities, adding that it makes it imperative for an upward review of derivation principle and introduction of fiscal federalism.

The Governors questioned the rationale of not exploiting other mineral deposits in different parts of the country while depleting the oil and gas reserves of the South-South and expressed the strong conviction that the introduction of fiscal federalism and resources control will encourage each state of the federation to control its resources and develop in accordance with its capability.

In view of the situation in the country, they expressed deep concern at the level of insecurity in some parts of the country and appealed to the Federal Government to continue to explore all avenues to end the indiscriminate and unnecessary destruction of lives and property.


Two presentations were made on the briefing of the Second South-South Economic Summit slated for Asaba, Delta State and Power and Energy respectively and they affirmed that the summit would take place from April 26-28, 2012 and noted the efforts of the BRACED Commission and the Delta State sub-committee for the summit while extending an invitation to members of the private sector especially from the South – South to attend the summit which would focus on development, investment and security.


The Director General BRACED Commission, Ambassador Joe Keshi briefed the governors on the activities of the commission since the last Governors meeting in Uyo, Akwa Ibom State held on November 19, 2011 and also highlighted the meetings held with the Commissioners, development partners and other stakeholders in the states.


According to Keshi, they brainstormed on modalities for actualizing the region’s mission and objectives in Education, Agriculture, Industrialization of the region in collaboration with UNIDO and NDDC and Infrastructural Development and Multi- modal transportation in the region.


The meeting, which was attended by all the Governors of the South-South geopolitical zone, was the first to be held after the governorship elections in Cross River and Bayelsa States respectively. They congratulated the two Governors -- Senator Liyel Imoke on his reelection as the Governor of Cross River State for a second term and Honourable Henry Seriake Dickson on his election as Governor of Bayelsa State.