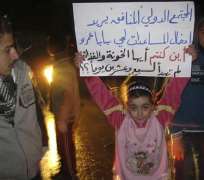 Syrian forces flooded the city of Deraa on Monday after overnight clashes there and pursued "clean-up" operations in Homs, where the Red Cross was still struggling to gain access to a former rebel bastion.

China said it would send an envoy to Syria to try to halt a conflict that has divided Beijing from Western and Arab powers demanding stronger action against President Bashar al-Assad.

Hundreds of troops and security men fanned out in Deraa, where the anti-Assad revolt flared nearly a year ago, on a scale not seen for months, a resident of the southern city said.

The clampdown followed attacks on security checkpoints in the city centre that were also the most extensive for months. At least one person was killed, the Deraa resident told Reuters.

Outgunned rebels have multiplied hit-and-run assaults across Syria in the last few days to signal their defiance after the military overran the Baba Amr district of Homs.

Syrian armored forces recaptured Baba Amr from its lightly armed defenders on Thursday after an almost month-long siege in which shelling reduced much of the district to rubble.

The International Committee of the Red Cross and the Syrian Arab Red Crescent were still seeking approval from Syrian authorities to enter Baba Amr to help civilians there.

The two agencies provided aid and medical care on Sunday to Baba Amr residents who had fled to the nearby village of Abel, ICRC spokesman Saleh Dabbakeh said in Damascus. "At the same time we continue trying to get into Baba Amr," he added.

Opposition activists have accused Syrian forces of carrying out bloody reprisals in Baba Amr, but their reports are hard to verify given Syria's severe curbs on independent media.

Human Rights Watch quoted "local sources" on Friday as saying about 700 civilians had been killed and thousands wounded in Homs since a military assault in the city began on February 3.

It said 16 members of the security forces killed by insurgents had been buried the same day.

The British-based Syrian Observatory for Human Rights said the security forces had killed 29 people across Syria on Sunday. The Local Coordination Committees, a grassroots opposition group, put the death toll at 62, including 17 in Homs.

The United Nations refugee agency said up to 2,000 Syrians were fleeing the fighting for neighboring Lebanon, but it was not immediately clear how many had actually crossed the border.

"We had similar numbers in April 2011, but the flow of new arrivals had stabilized since then," Dana Sleiman, Beirut-based spokeswoman of the U.N. High Commissioner for Refugees, said.

Lebanon hosts more than 7,000 registered refugees from Syria. Turkish leaders say about 12,000 Syrians, half of them not registered at camps, have fled to their country.

Refugees told Reuters of army shelling and gunfire in border towns. One woman said she and her family had fled the village of Jusiyah, near Qusair, about 12 km (7 miles) from Lebanon.

"In the morning the shelling started, so we had to leave towards Lebanon. There were some wounded, but I don't know what happened to them," Um Ali, 64, said on Sunday.

WORLD DISUNITED ON SYRIA
The world has failed to agree on how to halt the bloodshed in Syria. Last month China and Russia vetoed a U.N. Security Council draft resolution that would have backed an Arab League call for Assad to step down as part of a political transition.

Assad has rejected the plan, saying he is pressing ahead with his own political reform timetable, which includes a multi-party election within three months based on a new constitution.

Saudi Arabia and Qatar are among countries that have called for Syrian rebels to be armed, but there is little appetite in the West for Libya-style military intervention that could have many unforeseen consequences in the conflict-prone Middle East.

However, senior U.S. Republican Senator Lindsey Graham on Sunday advocated arming Syria's rebels through the Arab League and suggested the imposition of "no-drive" and "no-fly" zones against Syrian military forces.

And China's former ambassador to Damascus, Li Huaxin, will go to the Syrian capital on Tuesday to discuss a six-point Chinese plan, the Chinese Foreign Ministry said.

In a statement at the weekend, Beijing warned other powers not to use humanitarian aid for Syria to "interfere" there, and urged Assad's government and other warring sides to stop fighting "immediately, fully and unconditionally".

The United Nations says Syrian security forces have killed more than 7,500 civilians since the revolt against the Assad family's four-decade rule began in March last year.

Several Arab and Western countries have pulled their diplomats out of Syria and imposed sanctions in protest.

Air France cancelled its Damascus flight on Monday for "security reasons", a spokeswoman said without giving details. The airline has yet to decide on this week's remaining flights.