Nana Ama: I have never been married 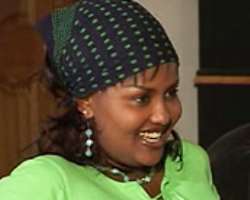 
Pretty Kumasi-based actress Nana Ama McBrown has explained away rumours that she and Nana Wiafe Akenteng, popularly known as Chief from Asante Hemang were no longer husband and wife.

"I am a single woman", she told Peace FM s hard-probing talk show host, Kwasi Aboagye in an interview aired on his Entertainment Review (ER) programme a few days ago.

"Single?", Kwasi Aboagye asked in utter surprise. "Yes, in fact I never got married and never got engaged. The closest I got to marriage was at the knocking stage", Nana Ama replied.

"So what was all the noise in the media a couple of years ago that Nana Ama McBrown was married?"

"Well, perhaps they wanted to sell their papers and their magazines".

Nana Ama told ER that most people could not differentiate between knocking and engagement when it came to marriage customs and "that may be the reason the media took her knocking ceremony for marriage.

"I am free", she said, but "it doesn t mean that every man is welcome."

Nana Ama s remarks on ER contradicts what she and her "husband" told the authoritative Mirror in an exclusive interview published on August 5, 2006.

The Mirror reported that the couple s "fairy tale marriage ceremony was held quietly in Kumasi about five months ago after the two had dated for a long time.

"Chief, how do you feel when you see other men literally kissing and cuddling your radiantly beautiful wife in movies?" The Mirror asked Nana Ama s husband .

"Oh, I take those things as acting, but if I see that the man is going too far, I make the effort to meet him and ask him to bring me his wife so I can also "press" her a little and we all laugh about it," he replied with jest boldly written on his face.

He said apart from Nana Ama smoking in scenes, he was not worried about the things she did on set, "because that s her job and I know she likes it." He said he did not want her to smoke in movies because she once developed a sore throat after she had taken a puff on set.

Off the set, Nana Ama said she did not smoke or drink. "Indeed, the wild roles I play are just the opposite of me in real world and I hope that people would learn good lessons from my character on set and not copy the vices."