By Katy Glassborow in The Hague IWPR 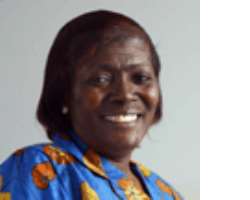 Judge Akua Kuenyehia's office, on the top floor of the International Criminal Court in The Hague, is filled with Africa. There are maps of the continent, African art on the walls and a shelf of beautiful African carvings.

Judge Kuenyehia, one of three female African judges at the ICC, is first vice-president of the court. And because all the cases currently at the ICC are African, the Ghanaian judge feels that her knowledge of her home continent serves her well.

For example, she and her colleagues had to approve the forms that victims of war crimes fill in if they want to take advantage of the court's unprecedented move to allow them to have a greater involvement in proceedings.

"When people run away from conflict they often take nothing with them, so we cannot ask them to produce passports, email addresses or paperwork," explained Judge Kuenyehia.

As well as being first vice president, Judge Kuenyehia is also one of the judges in the pre-trial division, which deals with preliminary issues, including admissibility of cases and the confirmation of charges against an accused. This means she assesses all the evidence that Chief Prosecutor Luis Moreno-Ocampo brings against a war crimes suspect, and decides with the other pre-trial judges whether a case should come to trial.

A former lecturer in criminal law, gender law and international human rights law at the University of Ghana, Judge Kuenyehia has co-authored several books and influential papers on how law is interpreted and implemented throughout her continent. She told IWPR she has spent many hours arguing over cases with her husband, who is still a practising lawyer in Ghana.

She has sought to encourage African women to gain a better understanding of the law, setting up networks of female professionals who go out into communities to promote awareness of legal rights and issues.

She represented Ghana on the United Nations' Convention on the Elimination of All Forms of Discrimination against Women, CEDAW, committee in 2003 and worked hard to contribute to its reputation and influence.

Joana Foster, senior gender adviser to the UN mission in Liberia, said Judge Kuenyehia mobilises people in conventions such as CEDAW, helping to build organisations so influential that governments have little choice but to listen.

Foster said the judge has helped a number of organisations become strong political players, including Women in Law and Development in Africa, the Federation of Women Lawyers in Ghana and the Gender and Human Rights Documentation Centre.

Judge Kuenyehia is particularly interested in using her legal expertise to identify problems - and find solutions.

Under traditional customary law, women in Africa south of the Sahara do not inherit property, and even though legislation was passed in 1985 to give women inheritance rights in her native Ghana Judge Kuenyehia said that getting the law to work is an entirely different matter.

"Customary law is not written, but is deeply ingrained in both men and women," she said. "But we cannot live in a world where fifty per cent of the population is cut off from the very resource that will help them progress."

She realised that education was key, and that practical training is essential to enable women to understand, and access, their rights.

With other women lawyers, Judge Kuenyehia set up legal services centres in Accra and Kumasi to help Ghanaian women who previously thought the law only applied to them if they were in trouble with the police. "Going out and meeting these women gave me insight into how the law impacts their lives, which helped me realise where we needed to push for changes in the law," she said.

She realised that in order for the law to be responsive to people, they needed to be consulted first, "We should never underestimate the intelligence of people."

Foster said that before attending the UN World Conference on Women in Beijing in 1995, Judge Kuenyehia got all the Ghanaian representatives to "go to the markets in Ghana and talk to the women, listen to their concerns and find out their needs." Foster said this meant the representatives identified where women had gaps in knowledge over their rights and entitlements, and were then able to go to Beijing and plan strategies to simplify the law and raise awareness.

Consequently, Judge Kuenyehia advocates law training for traditional leaders like Queen Mothers - the inherited title of Ghanaian female leaders who ultimately decide who are elected Chiefs of their communities. "She works with Queen Mothers and trains them, so that when the Chief is sitting in a traditional court they can give him sound gender advice," said Foster.

As well as practical training, Judge Kuenyehia's Women and Law in West Africa gender research centre in Accra also works to confront the government with reliable statistics to back up the need for revised laws.

For example, the centre found that three out of every ten women in Ghana are beaten by their husbands, and now a domestic violence bill is going through the legislative process. "We are consulting all shades of opinion so that when the law is passed there is a feeling that it will be responsive to the views of all people," she said. The centre also looks beyond Ghana across Africa to research and share best practice.

Cynthia Grant Bowman, a professor of Law at Northwestern University in the United States, who co-authored Gender and Law in Sub-Saharan Africa with Judge Kuenyehia, said she has a sensitivity to legal problems, having seen them in reality on the ground.

"The law cannot wave a magic wand, but can only change real world problems slowly by political means," said Bowman. Despite the many attempts at statutory reform, a large percentage of African populations live in areas governed by traditional customary law, rather than by written laws. "Women cannot take advantage of the new laws, as it would put them outside the community upon which they depend," said Bowman.

She added that Judge Kuenyehia knows that those drafting new laws must see how people have traditionally been governed in order to understand the impact of changed laws on their lives, and be sensitive to the ramifications.

"There is a toughness about her which means she will not have the wool pulled over her eyes," said Bowman, stressing that Judge Kuenyehia knows that although most African countries have adopted all the international human rights treaties some only pay them lip service.

The judge seeks to mitigate this discrepancy through networks such as the Women's Lawyers Association in Ghana - where she encourages female professionals to act as mentors for girls in remote villages. "When we go to visit, the women are surprised to see women lawyers. They say 'Can my daughter be a lawyer?' and we say 'Yes, but only if you keep them in school.'"

This is a lesson that Judge Kuenyehia - the eldest of six siblings, five of whom are university educated - learnt from her own mother, who was a school headmistress in Ghana. "There was no argument about education in my family," she said.

She first went to the University of Ghana, and then on to Oxford University in the UK – an academic institution she had always wanted to attend since she daydreamed about "the best school in the world" with her father as a young child.

Judge Kuenyehia talks of her mother as an excellent role model, and remembers watching her teaching while carrying her infant son on her back in the classroom, "It made a profound impact on my life because she demonstrated that you can be a mother and a professional."

When the judge was a herself a young mother lecturing at the University of Ghana, her nanny quit, so she took her children to work and told them to be quiet at the back of the classroom. "After one week the Dean called me into the office and told me he was very impressed, and that other women might have sat at home and complained about not having child care," said Judge Kuenyehia.

For her own children, a post-graduate Masters degree is seen as the minimum education qualification to aspire to. Her son is a lawyer, and he recently returned to Ghana to set up his own firm. And her older daughter lives in London working in finance while her youngest daughter is about to start her Masters degree at the London School of Economics.

She feels that women have to prove they are better than men in order to be a success, and has taken on a personal commitment to fund one girl through high school in Ghana every three years. "I mentor a lot of young girls because even though education is widespread, it is not widespread enough - girls lose out when parents are hard pressed and will be pulled out of school to help with trading," she said.

Foster feels that this insight into the status of women in Africa stands Judge Kuenyehia in good stead for her work at the ICC, "She knows women face a lot more challenges, and will make sure they have special measures, appropriate facilities, and are treated on an equal level."