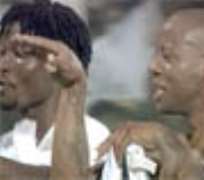 Ghana's Black Stars yesterday brought the Super Eagles of Nigeria down to earth after inflicting a painful 2-1 defeat on them in front of a capacity crowd at the Ohene Djan Stadium in Accra.

Prior to this encounter, the Super Eagles might have thought God was a Nigerian after they secured a quarterfinal berth by a miracle ahead of Mali in the 26th MTN Africa Cup of Nations, and for a brief moment in yesterday's match it seemed the Nigerians were going to get away with it in spite of their poor form.

Manuel Junior Agogo showed why he was the most sought-after striker on the continent at the moment when he tormented the Nigerian defence throughout the 90 minutes of the game.

It was a match in which the Black Stars showed resilience, resolve and tenacity in an electrifying atmosphere to overcome the Super Eagles, and when the Black Stars captain, John Mensah was shown the red card in the 60th minute, many a Ghanaian thought it was all over for the host nation. But inspirational Chelsea star, Michael Essien and ever-improving Junior Agogo scored in the 45th and 83rd minutes respectively to bring back smiles on the faces of 22 million Ghanaians.

The tension that characterized the first few minutes of the game resulted in numerous fouls, with Ghana giving every indication of carrying the day. Sulley Ali Muntari nearly fetched the opener for Ghana when he dispossessed Nwaneri on the left flank in the 16th minute, but his shot was saved by the Nigerian keeper.

However, the closest Ghana came to scoring was in the 26th minute when Asamoah Gyan's shot hit the side post.

All seemed to be going on well for the Black Stars until the 34th minute when the Algerian referee whistled for a penalty after Anthony Annan's body check on Yakubu Ayigbeni.

The Everton striker, Ayigbeni planted the ball into the net for the first goal of the match.

Nigeria's celebration was however short-lived as the Ghanaians equalized through Michael Essien on the stroke of half-time. The Chelsea player's header from a Quincy Owusu-Abeyie cross was planted on the blind side of the Nigerian keeper for the equaliser.

Back from recess, it was a ding-dong affair until the 60th minute when Skipper John Mensah was sent off for clipping Osaze Odemwingie.

The red card, instead of dampening their spirits, pushed the Ghanaians to lift up their game, with little Anthony Annan fighting the Nigerians for every ball in the midfield, while Essien was shifted to play the sweeper's role.

Ironically, the Black Stars dominated every department of the game at this stage, and their efforts paid off in the 82nd minute when Agogo tapped the ball into the net from Sulley Muntari's low shot across the post, to bring the scores to 2-1 for the host nation.

The thunderous roar that greeted the goal reverberated through every building across the entire length and breadth of Ghana.

The celebration of the goal lasted for about a minute, and in the end, Agogo the goal-scorer was booked for taking off his jersey (indecent exposure).

Much as the Nigerians tried, they could not fetch the equalizer, and it was all joy in the capital city when the referee brought proceedings to an end.

The Black Stars have thus qualified for the semi-finals of the 26th Africa Cup of Nations, and they would meet the winner of the Tunisia-Cameroon match which would be played today.
By Mohammed Muniru Kassim