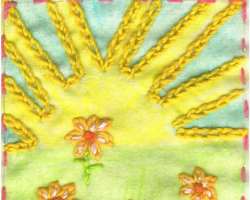 'Sunshine and Flowers'
Listen to article

In 1994 Zeraiah, my daughter had to undergo painful surgery. Her doctors felt that her dribbling was incessant and must be stopped. The procedure involved diverting the salivary glands under her tongue and repositioning them in her throat.

How do you explain to a four year old who has spent the best part of her life in and out of hospital that more surgery was a good thing? Especially when it was a new procedure with esthetic rather than essential surgery?

Whilst I had no doubt that the surgeon was skilled and the hospital workers were competent, the the cold indifference of the parade of nurses and doctors who came in and out of Zeraiah's room during previous hospital stays was a depressing, demoralizing, and dehumanizing experience that I could not forget.

They often treated her disability/disease rather than treating her as a person with a disability/disease, often talking in front of her as if she were a dumb animal who couldn't understand what they were saying. How awful it must have been for her to hear that her life expectancy was no more than 7 years. Even more demoralizing to hear that her vital organs would serve another better. Another child who was not disabled and so had a better quality of life. The piece de resistance was when they asked whether I would want her resuscitated if they lost her during surgery. Nothing said is ever lost on Zeraiah who is physically not mentally disabled. If only they had looked around to see the transition from horror to fear then despair in Zeraiah's eyes. Her eyes searched my face for the answer to the last question... My heart bled for my child.

Although they were assigned to her care, they acted as if they didn't care. Their behaviour was outright toxic to say the very least. But in all this I can understand why medical practitioners keep an emotional distance from human suffering as a form of self-protection. And I also understand how confronting difficult and demanding patients as well as pain, disease, and even death on a daily basis can form calluses around the heart. But when professional distance translates to this level of disregard and disrespect, surely this is a a form of malpractice?

The job of medical professionals is not simply to cure disease but to care for the overall well-being of patients. They do their job best when they help patients get better and help them feel better. What saved Zeraiah wasn't the pain-killing drugs but the love of family, special friends and the attitude of a few nurses who uplifted her spirits by simple acts of human decency a smile, a kind word, a compassionate expression or tone that conveyed the message that they cared.

We have to love and admire those who can bring their hearts to their work, knowing that mental sunshine and flowers are powerful medicines.

An Antidote to Pain

"Why can Pakistan never win the World Cup? Because every time they are given a corner, they open a Corner Shop!!"

This was the logic of my eight year old son Jas during the FIFA World Cup 2002. His headmaster Mr. Derek Heasman of blessed memory, a football enthusiast had arranged for a large screen to be set up in the school hall so all his little yobs could gather and watch every time England was playing. For this the school would open at 7.00am!!

Mothers like me who refused to participate would drop off kids to the resounding chant:

Sadly England did not quite make it but never the less a good time was still had by all!

The Bible states that out of the mouths of babes and Infants He has ordained praise... In other interpretations the word praise is substituted for wisdom. Many a truth is said in jest and the joke my son told stayed with me. As I sat and pondered it suddenly dawned on me that Corner kicks are awarded when a player is fouled... From this comes the golden opportunity to score a winning goal..

Disappointments can indeed be turned into new appointments with God in control of our affairs! As I studied the lives of many of the people who have inspired me I realised that there was a common thread... All of them at some point or the other had suffered and endured some disappointment or tragedy. It was this pain and suffering that berthed in them the desire to do something, make a difference, bring about a change that would impact the lives of others. In short without a test.. they cannot have their testimony!

When my Peter, my first child died I was devastated and as I grieved in the weeks and months that followed I found myself writing down thoughts and reflections which at the time were too painful to talk about. It was one way of acknowledging and recording for posterity what I had experienced rather than bottling it up and losing my mind. 18 years later I am by no means completely healed, that I now know will never happen, I have transformed much of my grief into positive energy. From the boundless love for my first born I extracted the motivation not only to survive but to thrive!

Then came Zeraiah… Caring for her 24 hours made me discover hidden talents, including affording me the time to write whilst others slept..!

Nani's journey from hopeless despair to tireless dedication is a classic example of resiliency - the capacity to bounce back from terrible tragedy. Her website can only be described as a noble effort to help others who could otherwise be trapped in the haplessness of their situation, it's also an act of self-healing.

Pulling a gratifying and constructive life out of the fires of personal trauma is a continual struggle often marked by setbacks. Resilient people overcome rather than succumb to the powerful forces of sadness and self-pity because they draw on inner resources to do what both Nani and I and countless others have chosen to do - begin again. An important impetus to resilient behaviour is the intervention of caring adults who not only console, but distract and ultimately re-focus emotional energy through encouragement and support. Just as important is the willingness of the injured person to keep heart and mind open to receive the healing qualities of love and time. Both caring, and the acceptance of caring, require character.

Over the years I have also come to understand that God does not test ... He proves..? God knows all things so He has no need to test us as the story of Job clearly shows. When He allowed all the tests and trials to prove his servant, He did so because He already knew the outcome... Job would come through as gold! Are we any different? Does he love us any less?? The answer is a resounding NO!!

If God brings it to you, He will bring you through it. I am told that administering more snake poison is the antidote to what can be a lethal snake bite. So somewhere in our tragedy is our antidote to not just our own suffering, but the suffering of others!

In conclusion like Jas's "Pakistani Football team" we may have entered the competition to win the World Cup, but when fouled and awarded a corner, let us open Corner shops, which in reality are more permanent a reward than keeping the coveted World Cup, but just for 4 years?

He sends us His rainbows

But only after the storms are past!

In and through everything

Let us continue to give thanks!