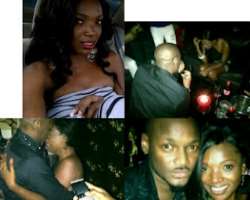 In what some have dubbed the triumph of love, Annie Macaulay was filled with tears of joy on Tuesday night in Lagos when Innocent Idibia popularly known as Tuface finally proposed to her.

At the event which was witnessed by a small crowd that included a few friends as well as other revellers, the musician presented a specially made ring which it was learnt cost N4.5 million Naira to his lover.

The loverbirds have since made their engagement public with their pictures littering the social media.

And from what we were told,they would likely tie the knot this year.

Further findings revealed that 2face has surprised Annie with a multi-million naira boutique stocked with all you can think of in Ikota Shopping Complex.

According to source,2face sent Annie shopping to America in December and when she came back he surprised her with the keys of the boutique and told her he was proud of her.

They have named the boutique,Forever Young and plan on opening it In March.

According to a new and yet unconfirmed report,circulating round the blogsville says the talented musician has branched out an olive leaf to his two baby mamas, Pero Adeniyi and Sumbo Ajaba, who lost out in the battle for his soul.

The report says he has offered each of the two women a sum of N10 million, a house in a choice area, and a car of their choice.

According to the report, Tuface who is currently recording his next album in LA, is making the moves quietly through a confidant to avoid the media from feasting on it.

More on this later.