Are You a Supergirl? 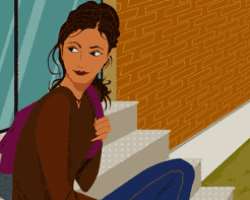 Sixteen-year-old Maame (not her real name) plays soccer and the piano, gets nearly straight-A's in her honors classes, tutors other kids, has a part-time job, is a member of her school executives, and participates in an after-school peer counseling program. She's also thinking ahead to getting into a good University like University of Ghana.

It's a lot of pressure, admits Maame, who lives in Nima, Accra. Most of it, she says, comes from herself. Her parents support whatever she wants to do "as long as it's positive." Still, all this positive stuff takes its toll on Maame and she says sometimes she loses perspective.

"If I get a B in a class I get really upset, and my mom has to calm me down," she says. "Especially with grades, I put so much pressure on myself. It's hard for me to get an 87 instead of a 90 and be okay with it."

On top of that pressure, Maame says she gets a lot of pressure from other girls and the media to be "skinny, tall, and have a perfect complexion."

"I try not to let it affect me too much," she says. "But of course it's going to because we get it from so many places."

Maame isn't imagining the pressure. A recent survey from a nonprofit organization, Girls Incorporated, found that girls are getting pressure at younger and younger ages "to be everything to everyone all of the time." Among the findings

* Nearly three out of four girls (74 percent) agreed that girls are under a lot of pressure to please everyone.
* Half of the girls in elementary school and three-quarters of girls in middle and high school report that they worry about their appearance.
* More girls in this survey (84 percent) said they feel pressure to dress "right" than girls did in 2000 (75 percent).
* More girls in 2006 (60 percent) said that the most popular girls in school are very thin than girls did in 2000 (48 percent).
* Six of every 10 girls said they often feel stressed.
* Half said they're always bored.
* One out of every three girls said they often feel sad and unhappy.

"There is something wrong when being a girl means feeling pressure from all sides to be attractive, caring, smart (but not too smart), athletic, helpful at home, and soft-spoken about your achievements," says a nonprofit organization. "These stereotypes create intense, unfair pressure and can limit girls' hopes and dreams."

When girls like Maame say they're stressed, it means more than having a lot of work and not enough time. Brown, a senior research associate at the Palo Alto Medical Foundation Research Institute and an expert in adolescent development, says being a supergirl can mean you're less healthy. According to Brown, if you're a supergirl you may not be sleeping enough — and the sleep you do get may be poor. You may not be eating well because you aren't taking the time. And you may not be spending enough time with family and friends who love you just the way you are.

Some supergirls even develop eating disorders: A 2004 study from the Journal of Adolescent Health found that teenage girls with anorexia nervosa also tended to be perfectionists about their appearance and about meeting their own very high expectations.

But you don't have to have an eating disorder to be a supergirl, Brown says. In fact, Brown says there's an "under-researched population of adolescent girls who are doing well in school, not eating disordered, and therefore ignored" — but who need help learning how to care for themselves. Often these same girls become adults who don't know what they want for themselves and are depressed.

"Part of adolescence is that you have to take stock of who you are as a person in the world," says Brown. "But supergirls define themselves in relation to who they are to other people: 'I am the good student. Who I am is based on who I am in relation to you.' Sooner or later, they realize they don't know who they are or what they want. Because of all this pressure, they are living the dream, doing what they're told, and postponing that adolescent questioning to later."

The good news is that the more support supergirls have, the better they weather the pressure. The Girls Incorporated survey found that girls who had adults they could trust and friends who were going through the same thing were more likely to oppose gender stereotypes and recover better from the stress.

"Feeling as though you need to make everyone happy all of the time is frustrating, confusing, and unfair," says NGO. "When a girl starts experiencing such pressures as early as third grade, it can be even more puzzling. It is essential that girls know that it is very important to talk about being afraid, stressed, or confused."

For her part, Maame says she's glad she has a mom who loves her just the way she is. And she says she tries to talk herself down from the mounting pressure to look and act perfectly.

"What I tell myself is that [looks] are a big thing in high school and I'm almost done with high school," says Maame. "I just have a year and a half left of this, and then I'm done. My parents help a lot too. My mom tells me all the encouraging things parents are supposed to say: 'You're a great kid, you're beautiful.' It helps."