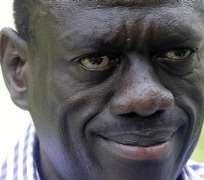 Since Museveni, in power for 25 years, won a presidential vote in February last year, Besigye has led a series of often violent demonstrations to protest against high food and fuel prices in the east African country.

Party officials said fragments from an exploded device caused slight burns on Besigye's left leg at the rally held in downtown Kampala, an opposition stronghold. The police said they had no reports of any injuries.

"The explosion released some fragments which tore through Besigye's trouser and caused slight burns on his left leg," Anne Mugisha, a senior official for his party, Forum for Democratic Change (FDC), told Reuters.

"He visited a clinic and his wounds were dressed and he went home," she said.

The rally was organised by FDC, the biggest opposition party, to mobilise support for further demonstrations against the government.

Police said they had to disperse the rally because the venue was inappropriate and Besigye had refused to move to another place.

"We used appropriate force to disperse their illegal rally and we have no reports of anyone injured," said Ibn Senkumbi, Kampala metropolitan police spokesman.

"They're trying to dramatise everything to gain sympathy. What we know is that Besigye headed home after we stopped the rally."

The independent NTV television station showed scenes of Besigye's supporters being dispersed with teargas and two men showed off their trousers, which were shredded, and what appeared to be deep gashes on their legs.

Besigye, who has now lost three elections to Museveni and has been arrested repeatedly for his actions, has also suffered injuries in rallies held last year.

At one time his finger was hit by a rubber bullet. On another occasion, Besigye had to travel to Kenya for treatment after he was beaten while under arrest by police forces seeking to prevent him from leading "walk to work" protests against the rising prices.