Barca Avoiding La Liga Hiccups On The Road In Europe 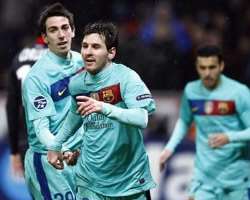 Barcelona's bid for a fourth straight La Liga title is foundering due to their erratic away form but Tuesday's 3-1 Champions League victory at Bayer Leverkusen suggests they are unlikely to suffer the same problem in Europe.

Winning a lucrative third continental crown in four years is the obvious priority for the Catalan club, especially if they can do so at the expense of arch rivals Real Madrid, who are 10 points clear in Spain's domestic league.

Jose Mourinho's Real side have pulled away at the top due to Barca taking only 17 points from a possible 33 on their travels.

In the Champions League group stage, however, Barca won all their away matches, including a 3-2 success at AC Milan.

A dominant performance in Tuesday's last-16 first leg at Leverkusen's BayArena stadium, in which Barca had 72 percent of possession and had a Lionel Messi effort come back off a post, answered some of the questions hanging over the team following Saturday's shock 3-2 La Liga defeat at Osasuna.

However, coach Pep Guardiola will still be concerned about a number of issues, including the fitness of key playmaker Xavi.

Without the 32-year-old, who has been sidelined by a leg injury and watched Tuesday's game from the stands, Barca have at times struggled to exert their customary control over opponents.

The patchy form of Xavi's Spain team mate and centre back Gerard Pique, who was at fault for two, if not all three, of Osasuna's goals on Saturday and was not even on the bench in Germany, is also a worry.

Asked whether Pique had been punished for his performance in Pamplona, Guardiola told reporters he had rested him only because he did not want to lose him for Sunday's La Liga game at home to Valencia.

"Pique knows that I have lots of love for him," Guardiola said. "For us, he's untouchable."

RANDOM FACTOR
One reason Barca may have struggled away from home is that some of the smaller pitches are less suited to their free-flowing playing style than the wide-open spaces of the Nou Camp.

Guardiola picked out what he called "the random factor", which he said the players were allowing to feature more in Barca's games this season than in previous campaigns.

"We have a problem," he told a news conference. "We've dominated the game for a lot of years and in the past the random factor didn't figure in our play.

"We didn't give it any room. We must get back to that level and not let randomness feature in our games. We have to control it by playing better," the former Barca and Spain midfielder added.

One bright spot for the coach has been the emergence of forward Alexis Sanchez, especially in the absence of long-term injury casualty David Villa.

Chilean Sanchez, bought from Udinese for some 40 million euros in the close season, netted twice on Tuesday and has eight goals in La Liga.

"He allows us to use the space on the pitch better," Guardiola said.

"He has good movement and he is a humble lad who helps us a lot. Those two goals will be good for him."

Barca host Leverkusen for the last-16 return leg on March 7.