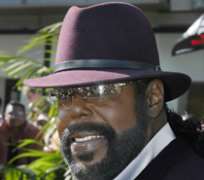 Canadian Research; Men with deep tones produce more children
For many women, the deepness of a man's voice is one of the most powerful aphrodisiacs, a new study co-authored by a Canadian psychologist suggests.

All else being equal, males with lower voices produce more children than their higher-pitched counterparts, concluded the researchers in a search for evolutionary explanations of sexual attraction.

The study looked at Tanzania's Hadza tribesmen, one of the world's few remaining hunter-gatherer societies, because the Hadzas never use birth control, a complicating factor that makes it impossible to do such research elsewhere in the world.

The discovery that the pitch of their voices was a major determinant of how many children they would father underlines the deep-seated roots of the seemingly superficial human trait, said David Feinberg, a psychology professor at Mc-Master University in Hamilton, Ont.

Previous research has indicated that a deep voice signifies robust genes, in evolutionary terms. The findings, however, can not really be put into action on the dating scene, stressed Prof. Feinberg, a co-author of the study.

"This doesn't mean, go out and find a guy with a low-pitched voice if you want to have lots of babies," he said. "[But] it tells us a bit about where we came from and where we're going."

The findings, though, came as no surprise yesterday to professionals in the dating world.

At Toronto-based Misty River Introductions, billed as a "traditional match-maker," men with deep voices always seem to do better, and are much more likely to move beyond the initial stage of a telephone conversation with their potential date, said manager Linda Miller.

"We've had certain clients, you couldn't tell if they were men or women when they called in. They don't do terribly well," she said. "And then you have men who have radio-annnouncer voices, they have that great masculine timbre, and every call is a hit."

Some of Ruth Claramunt's female clients at Hearts Canada, another match-making service, have actually specified that they like men with low voices.

"Or if someone has a squeaky little voice: 'Oh, I didn't really like him,' " said Ms. Claramunt. "They could be a great big hunky guy and if they have a squeaky voice over the phone, it's sort of a negative."

Prof. Feinberg said he has been trying to see whether human males attract their mates with the same kind of "ornaments," like a peacock's plumage or a deer's antlers, seen elsewhere in the animal world.

Earlier in human evolution, it appears that the appeal of a deep voice was linked to testosterone levels. Deep voices are caused by high testosterone levels in adolescent. Large volumes of the hormone can also prompt immune suppression in a weaker person, so someone who survived to manhood with a deep voice would necessarily have a strong genetic makeup, said the psychologist.

No one, however, has been able to test until now whether the attraction of a deep male voice translated into their having more reproductive success.

For the study, Prof. Feinberg and his colleagues, anthropologists at Harvard and Florida State Universities, looked at 49 men and 42 women among the 1,000-strong Hadza people, who choose their own mates but have a fairly high divorce rate in an informal system of "serial monogamy."

The participants spoke into sensitive microphones and had their voices analysed with sophisticated electronic equipment. The pitch of the men's voices accounted for about 42% of the difference in number of children between fathers, the researchers found.

Although other studies have suggested that men are more attracted to women with high voices, the study found that the pitch of the women's voices did not predict how many children they would have.