Dad's already heard quite enough, thanks 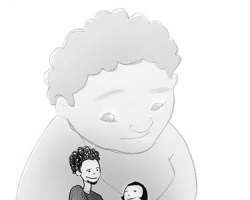 Why does everyone dish out the gloom and doom?, asks expectant fatherPhotograph by : Illustration: Pierre A. Lameille/Calgary Herald
Listen to article

A little advice from an expectant father who is a little tired of unsolicited advice -- please, enough already.

Since my wife and I went public with our initial fetal offering (IFO) last month, nobody has hesitated to tell us exactly how bleak, how painful and how boring our lives are doomed to become.

As for my partner, Euphemia, she's been told: you're not allowed to drink at all. In fact, as an expectant mother, you better cut out coffee, soy milk, rice juice, fizzy juice, tap water, filtered water, honey, pop, olives, soft cheese and -- don't forget -- raw seafood will kill your baby. Cat poo is also off the list, though we have never been in the habit of eating cat poo, cooked or raw.

The joy of scooping the litter is now mine and mine alone, and I can't help but draw the gross comparison between what comes up in the sand box and the nuggets of wisdom offered by all and sundry. Even welcome information is meted out in a slightly tainted fashion.

The early stages of pregnancy, probably the whole thing if the situation continues as it is, appear to be something of an open invitation for Debbie and Donald Downers to vent. In Club Parenti, everybody suffers.

We've been married four years, together for six. We rarely fight. Doesn't matter, we hear. The relationship will be strained, our advisers suggest.

OK, fine, I can see that -- the 500-pound gorilla in the room, made flesh and transformed into a squealing purple 10-pounder. It has to have some kind of an impact. But does it really warrant the by-now-familiar tsk-tsk shake of the head, the look of knowing grief? Billions of people have done it and been just fine. Three hundred thousand of the little terrors make their way into the world daily.

News we've opted for a home birth is often met with stares of horrified wonder.

It's so uncivilized, so dreadlocks and no deodorant, their reactions say. The fact we find hospitals somewhat cold and intimidating is ignored. Surely, they hint, Euphemia would feel better if she was attached to a machine that goes "ping!"

My personal favourite so far was the reminder to make sure we clean up after the birth.

Thanks. After so many years living in filth and squalor, we just figured we'd let the whole hygiene thing slide.

Even if the fear-spreaders are right, it's not like we can take the baby back for a refund.

How about some positivity?

I just spent a few days with my in-laws and their kids are awesome. My three-year-old nephew was genuinely concerned when he wasn't able to reach the beer shelf in the fridge and bring me a bottle. That's a positive.

Euphemia taught him to say "poo face" and "fish lips" and that was simultaneously hilarious and impressive because he learned so quickly and didn't hesitate to tell his mom.

My sister's little girl screams and cries whenever I come near her, but once, when she wasn't pathologically afraid of me, she slept for an hour on my chest and the warmth and the cuteness of it all made me go all wobbly. Same with the first hug from my godson. Positive and positive again.

There's the love, I want to say. Tell us about that stuff. The rest, I'm sure, we'll find out for ourselves.

Matthew Ramsey is a writer and dad-to-be living in Vancouver.