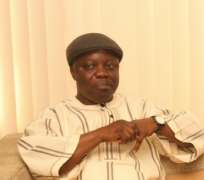 SAN FRANCISCO, February 09, (THEWILL) - Governor Emmanuel Uduaghan of Delta State has banned the use of GSM phones by pupils of public primary and secondary schools in Delta State.

The Governor, who announced the ban Thursday at Ogharefe Secondary School, Oghareki Junction, during an inspection tour, said that the use of mobile phones by pupils was “unacceptable to the Government.”

According to him, the use of mobile phones by the pupils, breeds indiscipline as it distracts their attention from the main focus of academic pursuit.

Dr. Uduaghan who addressed the pupils after observing that most of them had phones while studying, ordered school principals and heads of primary schools across the state, to henceforth seize such phones from the pupils.

He said that the pupils were in schools to learn and not play stressing that parents and teachers should ensure that the pupils leave their phones behind at home when going to schools.

“Discipline is very key to the development of our youths and this starts from the homes thereafter the schools is the next place … I was very disappointed at the level of indiscipline where you find that they were playing with mobile phones,” he stated.

Furthermore, the Governor said: “This is not acceptable; no student should take mobile phones to schools. The issue of discipline particularly as it affects the use of phones must be taken seriously”.