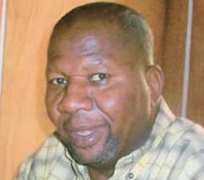 •Baba Suwe
The saga of the National Drug Law Enforcement Agency (NDLEA) versus popular Yoruba comedian, Babatunde Omidina a.k.a Baba Suwe may not have ended as the agency on Wednesday asked a Lagos High Court for a stay of execution of judgment.

NDLEA made this application before Justice Yetunde Idowu of a Lagos High Court sitting in Ikeja through its Director of Prosecution and Legal services, Femi Oloruntoba. It is asking the court for an order of stay of execution on its November 24, 2011 judgment that it pays Baba Suwe N25million compensation pending the determination of an appeal it filed before the appellate court on December 6, 2011.

According to Oloruntoba, the agency would be prevented from performing its statutory functions as well prosecute the appeal if it was made to pay the judgment sum of N25 million as it was half of its monthly available resources. Among the grounds of its application for stay of execution is that it has filed an appeal and the judgment of the court of appeal will be null if the appeal succeeds, adding that the lower court lacked jurisdiction to have entertained the matter, award damages or make the orders it made.

Another ground is that the agency has been able to show that lack of fund will not allow it prosecute the appeal and carry out her statutory duties. The application is also predicated on the ground that Baba Suwe will not be able to refund the judgment sum of N25 million if NDLEA succeeds in its appeal.

Oloruntoba added that the agency did not get N7billion monthly but was allocated N52 million monthly, which is the total sum of all its activities including investigations and litigations as well as running cost, adding that out of the N7billion that they got annually, N633million went into workers salary. Oloruntoba also stated that the application was necessary to maintain status quo, pending the determination of the appeal.

He also concluded that the agency could only provide a bank guarantee of the judgment sum if it negotiated with the bank where its account is domiciled as it had accrued financial liabilities, which it was unable to pay due to lack of fund. On the issue of apology, it contended that if it was made to publish an apology to the comedian in two national dailies as ordered by the court, the apology could not be retracted if the appeal succeeded, adding that its right to appeal would be highly prejudiced.

However, in his response, Omidina's lawyer, Bamidele Aturu, opposed the application on the ground that the issue of lack of jurisdiction of the court did not hold water. According to him, the overriding principle is that the successful party in litigation should not be refused the fruit of litigation, adding that his client was not impecunious and would be able to refund the judgment sum if the agency's appeal succeeded.

He held that the agency could conveniently pay the judgment sum from its statutory funding as an agency of the Federal Government. While asking the court to refuse the application, he stated that the agency did not have any accrued financial liability as alleged, adding that some paragraphs of the affidavit in support of the application for stay of execution were false.

He, therefore, asked the court to make an order mandating NDLEA to deposit the judgment sum with the Chief Registrar of the court who will in turn deposit it in an interest yielding account pending appeal. Ruling on the matter has been fixed for March 2, 2012.