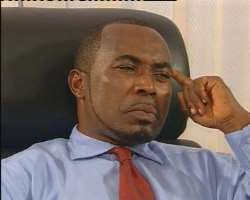 The name, Zack Orji rings a bell across Nigeria. As an actor, and a good one at that, his face graces the tube, making him a household name.

However, ever since the fatal accident that nearly claimed Orji's life in Bauchi, nobody seems to know what his happening to him. The actor had recovered from the injuries he sustained and mourned his friends who died in the crash, but he appears to have disappeared from public glare.

To be sure, Orji's fans are worried that he is missing in action at present. Although they know that actors come and go, they are confident that with the rating and proficiency of Orji he can never go out of season.

Like the musician who brought a message from Jah that Nigeria must be free, fans of Orji's have message for him. They don't want the TV to be free of his handsome bearded face. According to them, they are still mourning the loss of, Richard Mofe-Damijo (RMD) to politics and would not want anything to add to their sorrow.