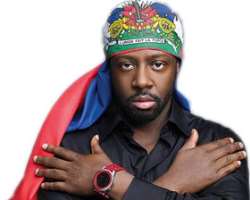 Wyclef Jean, the Haitian born American multi-platinum musician, record producer and rapper is expected to feature in the ongoing 2009 Calabar Festival. Wyclef Jean would be entertaining residents of Calabar at the main bowl of the U.J. Esuene Sports Stadium on Calabar Rocks Night.

The 37 -year former member of the Refugee Camp “Fugees” would thrill the expected crowd on Monday 28, December from 7pm.

The Preacher's son would be performing alongside the likes of the Koko master, D'banj and Africa's First lady of Hip Hop, Weird MC. Other artistes expected to perform that night include SLK, Sound Sultan and 3 Home Acts.

Julius Agwu, one of Nigeria's foremost comedy icons, is also expected to entertain guests with a series of rib cracking jokes.

In its 5th year, the Calabar Festival continues to attract crowds from around the country and beyond, featuring both International, National and Local artistes.

Some International stars who have graced this year's event already include, Chevelle Franlin, Ren Kenolly and Keri Hilsun.

The Calabar Festival is a 32- day event featuring such events like musical shows, cultural parades, Carnival Queen Pageant, Fashion shows and the Climax, carnival Calabar, which has been described as Africa's Biggest Street Party- a colourful expression of youthful exuberance and pride of place