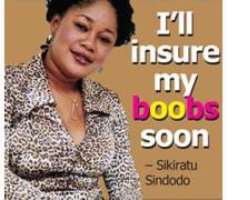 Five days after she was arrested in Ikeja for allegedly killing a 2 year old boy at Adeniyi Jones, Lagos, Nollywood actress, Temitayo Odueke, popularly known as Sikiratu Sindodo, is still being detained by the police.

www.nollywoodgists.com spoke to her this morning at the police State Traffic Division (STD), Obafemi Awolowo Way, Ikeja, where she confirmed that she was still being detained for alleged manslaughter.

Police sources confided in www.nollywoodgists.com that they might press charges on the actress at the conclusion of investigation.

It was gathered that the police insisted on charging the matter to court despite the fact that the victim's family wanted out of court settlement.

When www.nollywoodgists.com spoke to Sindodo on Sunday at the STD, Ikeja, she was not only sober, but expressed shock at the unfortunate incident, saying she could not explain how the accident occurred.

Lawyers, it was learnt, have been making moves to secure bail for her, but so far they've not succeeded.