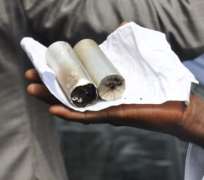 Nigerian police fired tear gas Thursday in Lagos at hundreds of protestors marching against the authorities' security crackdown in the aftermath of a week-long strike over fuel prices.

According to an AFP correspondent, more than 200 protestors defied police warnings and marched towards a park in the economic capital that had become the epicentre of mass mobilisation against the removal of fuel subsidies.

One protester fainted from inhaling the tear gas.
Troops deployed heavily on Monday after President Goodluck Jonathan was forced into a partial climbdown over fuel prices by nationwide strikes that threatened to shut down the production of Africa's largest oil exporter.

Troops and tanks have since been stationed in parts of the country and sealed off the main protest ground in Lagos.

Thursday's protests were led by a former presidential hopeful, Tunji Braithwaite, alongside a host of other respected Nigerians, including a former finance minister, Muslim leaders and renowned lawyers.

"As elders we are totally against the military siege in Lagos. This is a democracy. They should be withdrawn immediately," Braithwaite told the protesters before the march.

After the march was dispersed, just about half a kilometre from the rally ground, the protesters regrouped and began moving back towards the Lagos state parliament.

"We don't want any human casualties. These enemies of democracy, these enemies of progress are bent on making any otherwise peaceful protest a violent one by indiscriminately firing tear gas at a group defenceless people," said the 75-year-old Braithwaite.

Lagos state deputy speaker Kolawole Taiwo told the protesters earlier that "the occupation of Lagos by soldiers... is unconstitutional, it is unacceptable. Lagos is not at war."

The strike that had begun on January 9 had locked down Africa's most populous nation and brought tens of thousands into the streets in protest at a decision to scrap fuel subsidies that had more than doubled pump prices.

After unions ended the strike on Monday, some groups however vowed to push ahead with their protest movement until fuel prices were brought back to their 2011 level of 65 naira ($0.40, 0.30 euros) a litre.

In a statement, the Citizens Advocacy Group, which was behind Thursday's march, said it was against the "unilateral imposition" of a pump price of 97 naira (about 60 US cents) per litre.

The authorities had warned that holdout protestors would be arrested and those calling for regime change charged with treason.

On Monday, soldiers occupied the main protest sites. In Lagos, troops drove armoured vehicles at protesters to disperse them and fired shots in the air. Police also fired tear gas at hundreds of protesters gathered on a major road.