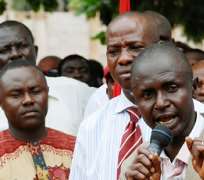 The authorities should investigate state involvement in breaking up a peaceful union meeting and arresting the union activists in violation of the right to freedom of association and assembly, the groups said.

“A review of the prosecution’s evidence reveals an apparent bid by the police and prosecution to silence union activists,” said Corinne Dufka, senior West Africa researcher at Human Rights Watch. “Rather than prosecuting Ugwu and Elobuike, the authorities should investigate who is responsible for targeting their meeting and having them beaten and arbitrarily detained.”

The two men were arrested on 24 October 2011 after more than 20 police officers, soldiers, and men in plain clothes armed with guns broke up a union meeting in Enugu that multiple witnesses described as peaceful. The security agents stormed the meeting, at the state secretariat of the Nigerian Labour Congress, and attempted to arrest Ugwu, according to the witnesses. Ugwu, who is the chairman of the Enugu State Workers Forum, was leading state workers in a prayer meeting for a favorable outcome to the labour negotiations. The women attending the meeting surrounded him to prevent the arrest. The security agents fired into the air to disperse the women and beat those who refused to move with their guns, belts, and sticks, the witnesses said.

The security agents dragged Ugwu out of the compound and beat him. In the course of dragging him away from the union members they tore off all his clothes, except his underwear, the witnesses said. The security agents then dragged him by his legs down the road to one of the police vehicles. Ugwu was injured on his head and legs. Elobuike, a civil servant who had been at the meeting and tried to help him, was also arrested, witnesses said.

The police allege that the crowd threw “stones, bottles and other objects” at them. After the two men had been taken to the police vehicle, a police officer was hit in the head and injured by a stone thrown from the crowd, a police sergeant said. Witnesses say some of the women fought the police while trying to prevent Ugwu’s arrest.

The two men were taken to the police headquarters in Enugu and on 26 October brought before the chief magistrate’s court, where they were arraigned on assault and attempted murder charges. The chief magistrate lacked the jurisdiction to hear the case but remanded them to prison pending a decision by the state attorney general whether to file charges at the High Court, a practice known as a “holding charge.”

On 3 November the men applied for bail at the state High Court. At the first bail hearing, held on 18 November, the judge decided not to hear the case due to concern over a potential conflict of interest since his wife is a senior aid to the state governor. The second bail hearing, scheduled for 9 December, was cancelled. At the third scheduled hearing on 20 December the attorney general appeared in person and opposed the bail application. The judge adjourned the case until 26 January 2012 to rule on the matter.

“These two men have been arbitrarily deprived of their liberty,” said Olisa Agbakoba, former president of the Nigerian Bar Association. “The apparent complicity of the prosecution and the delays by the court have allowed the state to run roughshod over their fundamental rights.”

The men were arrested during an ongoing labour dispute between civil servants and the Enugu State government over implementation of a new law increasing the minimum wage, which President Goodluck Jonathan signed into law in March 2011.

Nigeria is a party to the International Covenant on Civil and Political Rights, which guarantees the rights to a fair trial and to freedom of expression, association, and assembly, including trade union membership and activities. It is also a member of the International Labour Organization, whose fundamental principles, including the right to organize, are binding on all members.

Neither the police nor the state prosecutors have presented any evidence against the two on the attempted murder charge, and the only evidence of assault alleges that Ugwu held on to a police officer’s uniform and tore it while he was being dragged away.

“The reprehensible actions of the state are a gross violation of the rights to freedom of expression, association and peaceful assembly,” said Erwin van der Borght, director of the Africa program at Amnesty International. “These two men are prisoners of conscience who are being held on trumped-up charges. They must be immediately released and these spurious charges dropped.”

Background: The case against Ugwu and Elobuike
Amnesty International, Human Rights Watch, and Nigerian human rights organizations interviewed five witnesses who attended the 24 October union meeting. The groups also reviewed the court documents in the case, including the police investigation report and the prosecution witness statements, filed on 7 December at the Enugu State High Court, and the affidavits of the state prosecutors opposing bail.

These documents clearly show how the police violated Ugwu and Elobuike’s right to freedom of assembly and association by raiding a peaceful union meeting. They also demonstrate how the state attorney general used trumped-up charges to arbitrarily deprive the two men of their liberty.

Attempted Murder and Assault Charges
The first count on the amended statement of charges, filed by state prosecutors in the Enugu State High Court on 7 December, alleges that Ugwu and Elobuike “attempted to kill” a police sergeant, Emenbong Ndon, by “hitting him with a hard object on the head.” The second count, an assault charge, alleges that “on the same date, place and time,” the two men “held and tore the police uniform” of Ewah Bassey.

A statement by Sergeant Ndon, dated 24 October, says the police “stormed the area” to prevent a “threat to public peace and break down of law and order.” According to the police report, dated 25 October, the police went to the union secretariat to investigate a report that Ugwu had “unlawfully assembled some workers” and was “inciting them” against the Enugu State governor, Sullivan Chime, over his alleged failure to pay the minimum wage.

Under Nigerian law, however, no authorization is required from the police to hold a meeting. In contradiction of the police claims that the meeting threatened the public peace, another police corporal noted in his witness statement that when he arrived at the union secretariat he found a “group of people praying.”

Bassey, the chief superintendent of police whose uniform was allegedly torn by Ugwu and Elobuike, was the most senior police officer at the scene. His version of the events led to the assault charges against the two men. His 25 October statement says he was ordered by his superior to go to the union offices because Ugwu was “trying to cause a brea[k] down of law and order.” At the union compound, he said, he found Ugwu “hiding in the midst of over 100 women” who were “shielding him” from the police.

He told Ugwu that the police commissioner wanted to speak with him, but the union leader refused, his statement says. “As I made to go with him he held on to my dress and a very big struggle ensued as I held on to him, he also held my niform dress and in the process the uniform was torn by him and other people who did not want us to take him away,” he said.

There are no specific allegations against Elobuike in any of the prosecution’s witness statements.

As for the charge of attempted murder, Sergeant Ndon declares in his statement that after the police had “whisked away the suspects into the patrol vehicle,” Ugwu’s supporters threw a “huge stone” that hit him on the forehead, resulting in a deep cut.

Neither Sergeant Ndon’s nor the other prosecution’s witness statements contain any evidence that Ugwu or Elobuike threw the stone, the act that forms the basis of the “attempted murder” charge against them.

Despite the lack of evidence against Ugwu and Elobuike in the police statements and the police investigation report, state prosecutors used these documents to file charges of “attempted murder” against them in the High Court on 7 December.

On 20 December, the state attorney general, Anthony Ani, who also serves as the commissioner of justice, appeared in person, a rare occurrence at a bail hearing, to oppose their bail application. In support of his opposition, the state prosecutors allege in their affidavits that since the men have been charged with the “serious offense” of “attempted murder” and face “life imprisonment” if convicted, they would be “tempted to run away if bail is granted.”

“Above all,” the prosecution’s affidavit says, “the Applicant has been seriously inciting workers against the Enugu State Government over the National minimum wage.” The only example of “incitement” alleged by the prosecution is that Ugwu “declared two days [as] work free day[s] for workers.”

The prosecution also attached four union bulletins, all dated after Ugwu and Elobuike’s arrest, to support their claim. The prosecution alleges that one of these bulletins, dated 18 November, refers to the state attorney general as the “commissioner for injustice.”

International Society for Civil Liberties and the Rule of Law (Intersociety)