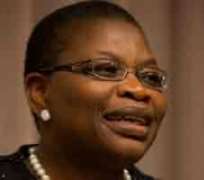 VICE President for Africa Region at the World Bank, Mrs. Obiageli Ezekwesili, would be leaving that post in May this year after a successful four-year tenure and an extra year of service at the global institution.

World Bank President, Bob Zoellick, who announced Ezekwesili's imminent exit in a statement from the Washington DC headquarters of the organisation, highlighted and commended her role in rebranding the bank.

Although Ezekwesili had completed a four-year tenure last year, and was already hoping to return to her family in Nigeria, she was asked to stay another year by Zoellick, who eulogised her contributions as the Bank's leading official on Africa since 2007.

Ezekwesili, known as Madam Due Process since the earlier days of the Chief Olusegun Obasanjo presidency due to her zeal for government reforms, will be returning to Nigeria to play a role in engaging African leaders and governments towards attainment and sustenance of good governance as well as provision of sound policy tools and agenda for the development of the continent.

Ezekwesili has been known to have actively supported African countries in pursuing core development goals and often praised for her personal zeal and knowledge in advancing a series of policy options for the continent's leadership, causing even the Economist magazine to recently review its previous doomsday prediction on Africa, and declare that Africa is indeed rising based on the upward growth rate on the continent.

Zoellick himself while recalling that the former Nigerian minister 'joined the Bank in 2007,' disclosed that 'last year, I asked her to extend another year, delaying her return home, to begin implementation of the new strategy, 'Africa's Future and World Bank support to it' that she did so much to develop.'

In flowing praise, Zoellick disclosed that, 'under Oby's leadership, our Africa team employed innovation, knowledge, partnership and financial services to strengthen results across Africa and to improve the prospects for Africa's economic performance.'

Continuing, the World Bank boss added that Ezekwesili's 'close attention to the needs of our clients, engagement with African leadership and with regional institutions – such as the African Union, EAC and ECOWAS – as well as with the UN and other partners, has helped us to leverage our effectiveness across Africa.' He said the Nigerian public reform technocrat 'has done excellent work mobilising private sector engagement and better connecting Africa's development to that of other regions, particularly through South-South partnerships.'

The World Bank statement also referenced how Ezekwesili built a strong team across the range of the Bank's work: infrastructure and human development; agricultural production and productivity; private sector development; economic reforms to overcome poverty; and governance and accountability.

Zoellick said this reflected her experience and background, and then called the former Solid Minerals Minister in Nigeria and Senior Special Assistant on Due Process 'a relentless campaigner for transparency and against corruption.'

According to him, Oby, as she is fondly called both at the bank and at home, also led the global financial institution in the use of ICT for development; in supporting social accountability mechanisms through civil society engagement; and in promoting innovative approaches to regional integration.

She was credited for the new World Bank strategy for Africa and its implementation plan, which she developed and for which Zoellick observed now offers 'a strong legacy,' for the global lending and financing agency.

Author of this article: From Laolu Akande, Chicago
Show Other Articles Of This Author