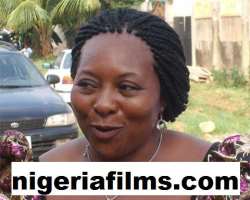 The Shakespearean saying that music is the fruit of the soul received a Nollywood confirmation last Saturday during the Amstel Malta Box Office (AMBO) finale, which held at the Shell Hall of the MUSON centre, Onikan Lagos, when veteran Nollywood actress Gloria Young jumped up and danced with abandon to the music of Wande Coal.

The actress, who attended the event without her husband, another Nollywood veteran, Norbert Young, who acted as acting instructor for the contestants in the show, seemed to throw caution to the winds and stood up to enjoy herself as the award winning singer from the Mo'hits crew gave a powerful performance of the track 'You Bad' from his album.