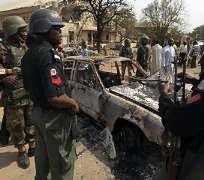 The outrage over the Boko Haram seeming invincibility is as worrisome to Christians as it is to majority of Muslims of this nation. Reactions to my earlier piece on ‘Boko Haram Republic; Why Not?’ shows that a good number of muslim scholars, clerics and devout disapprove of the senseless killings in the name of Islam however many of them wouldn’t mind having an Islamic Republic if it could be brought about without bloodshed.

The failure of the security agencies in checkmating the menace from the angle force is attributable to two worrisome trends- the existence of moles within the security apparatus and the parasitic influence of security contractors.

Moles are agents of a foreign power within a government organisation. They are spies who leak information to enemies of the establishment. During the cold war Britain had moles in the M16, people like Kim Philby who rose through the service tobecome the Head of British Intelligence in Turkey and later the British Chief Intelligence representative to Washington DC. He was all the while co-ordinating cells that leaks British and American intelligence to Soviet Union until his cover was blown by a Soviet defector . Philby operated undetected till 1963 when he fled to Soviet Union and was granted assylum. Therefore if western nations have a fair share of spies, Nigeria cannot be an exception.

These moles sympathetic to Boko Haram leak intelligence information on strategies, positions and preparedness of theNigerian Armed Forces and forestalls the pre-emptive assaults required for decisive victory. These agents by their positions are entitled to either participate in security meetings or privy to sensitive security reports and either way compromise the operational integrity of the entire assault. As a result of the compromise, innocent and courageous footsoldiers in the army , police , sss and others involved in the anti Boko Haram operations arekilled with ease.

The second worrisome cause of failure of the security agencies to contain the Boko Haram scourge is the distractions occassioned by the presence of security contractors. The Boko Haram bloodletting have been turned intobillion dollar business. Every dick and harry connected to heads of security agencies in all tiers of government have turned to security contractors. All manners of ridiculous proposals, opaque proposals, unrealistic proposals, fraudlent proposals are being packaged, repackaged, renamed, rebranded, rebaptised and represented to security tables for consideration. The details are too sordid and discussing them will not move the nation forward. I prefer to omit that section. At the end every party smiles to the bank and the bloodletting continues.

It has become a scramble for national cakein the name of security. A whopping $6billion dollars was budgeted for a people numbering below five hundred thousand while the rest of 149.5 million Nigerians are left with the rest $24 billion dollars in the 2012 budget. As ridiculous as it seems, this is the greatest distraction to the war against Boko Haram insurgency in Nigeria (ie excluding the more preferable social option). The amount involved is so much that only a patriot will act with restraint in the on going security bazaar and auction. The security officers are so busy sharing the security cake that that they do not have the patience to read through and analyse intelligence reports for preventive actions. The SSS knew and alerted of suicide bombings around the embassy axis in Abuja . They even trailed some peole from their Kano base, yet it happened. The police got wind of the Suleija bombings and alerted and yet we have death in our hands. People cannot sit down to analyse reports and follow clues and trends until another round of bloodletting is unleashed. How can it be when a more lucrative analysis on contract sharing is going on. The earlier these security contractors are banished the better for the war against terror.

President Goodluck should significantly reduce the security budget and command all commands,units, divisions, directorates and agencies involved in security in their respective domains to either perform or be replaced.

I equall appeal to Boko Haram members to stop making emergency billionaires out of another few set of Nigerians in the name of security by suspending their attacks and coming for dialogue.. The emergency billionaires that mismanaged the fuel subsidy imperilled the nation by creating problem for all of us. The more the bombings, the more justification for more money and the more continous open door to the wealth of the nation. At the end of the day there will be no more funds to lift the nation out of poverty and both Christians and Muslims will suffer the consequences of funds wasted in the fight against terror.Boko Haram are you listening!

***Obinna Akukwe is a Financial/ IT Consultant.