Ngozi Ezeonu dazzles, puts the past behind 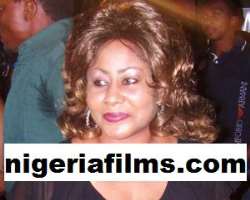 Ngozi Ezeonu has over the years carved a niche for herself in the movie industry with the way she handles the roles she is given. In fact, her roles which range from good mother, housewife who is cheated by her husband, friend betrayed by another friend, have all endeared her to many.

The actress was seen at a movie premier recently and she looked every inch the Ngozi we know, with a smile on her face for all her fans, bellying the story that the actress is lying low as her marriage of many years had hit the rocks some time ago.

This is no news to those who follow the movie industry as www.nollywoodgists.com gathered that the actress had left her matrimonial home because her husband had sent her out of the house, alleging gross infidelity.

But the news is that the actress is having so much fun and has put behind the fact that she is no more a married woman and what can one say except to tell her to live her life to the fullest as this life is only one to live.