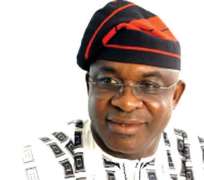 SAN FRANCISCO, January 08, (THEWILL) - President of the Senate, Senator David Mark, has call on security operatives to rise up to the challenges of the mayhem in the country stressing that the nation must unite to fight the menace of Boko Haram.

According to a statement by Kola Ologbondiyan, the Special Adviser to The President of the Senate, Senator Mark in a reaction to the continued attacks and bombings in Adamawa, Yobe and Borno states at the weekend condemned in no unmistakable terms the dastardly acts and asked perpetrators to listen to the voice of reason.

He expressed concern that the security situation was creating a sharp division along religious and sometimes ethnic lines leading to migration of people from one part of the country to the other.

The Senate President noted that a collaboration of all the security agencies and useful suggestions from opinion leaders could salvage the situation in the country.

"I believe it is a high time the security operatives devise new strategies to deal with the situation. They owe it as a sacred duty to protect Nigerians and their property anywhere the citizens chose to live.

"All men of good conscience must rise to the occasion to condemn these act of terrorism and find solution to it. Nigerians deserves to live in peace devoid of these unwarranted attacks and bombings".

Besides, Senator Mark urged the organized labour and civil society groups to follow the path of caution and shelve the strike action on Monday because such action could undermine peace and security in the already charged atmosphere.

The President of the senate reiterated that the unity of Nigeria cannot be compromised for anything saying The Almighty God did not make mistake keeping us together as a people with common mission and purpose.

On his part, he assured that the National Assembly will continued to be guided by the wishes and aspirations of all Nigerians adding that "whatever affects Nigerians and her citizens will always be our focal points."