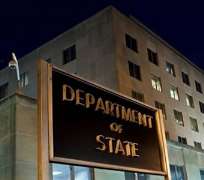 Venezuela's consul general in Miami has been declared to be persona non grata and must leave the United States, a State Department spokesman said Sunday.

Spokesman William Ostick declined to comment on specific details behind the decision to expel Livia Acosta Noguera, who has headed Venezuela's consulate in Miami since March 2011.

The Venezuelan Embassy in Washington was informed of the decision Friday, the spokesman said in a written statement, and the State Department said Acosta must depart the United States by Tuesday.

It was unclear Sunday whether she remained in the United States.

Last month, a group of American lawmakers said they had "grave concerns" about Acosta and called for an investigation after the Spanish-language TV channel Univision aired a documentary alleging that she was among a group of Venezuelan and Iranian diplomats who expressed interest in an offer from a group of Mexican hackers to infiltrate the websites of the White House, the FBI, the Pentagon and U.S. nuclear plants.

The evidence that the plot was real, according to Univision, are secret recordings with diplomats who ask questions about what the hackers can do and promise to send information to their governments.

Univision interviewed a purported Mexican whistle-blower -- a student at the National Autonomous University of Mexico named Juan Carlos Munoz Ledo. The student told Univision he was recruited by a leftist professor who wanted to wage cyberattacks on the United States and its allies.

Munoz told Univision he secretly recorded a meeting in 2008 with Acosta, who was then the cultural attache of the Venezuelan Embassy in Mexico. According to a recording Univision aired as part of its report, Acosta is heard saying that she can send the information gathered by the hackers straight to Venezuelan President Hugo Chavez.

Chavez has called the report "lies."
One of the Iranian diplomats told Univision that although he, indeed, was presented with a hacking plot by the Mexican group, he turned it down, in part because he thought they were CIA agents.

Last month a State Department spokesman said the United States did not know about the alleged plot, but that it found the Univision allegations "very disturbing."

However, "we don't have any information, at this point, to corroborate it," State Department spokesman Mark Toner said.