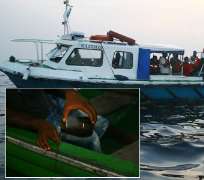 Fishermen in Akwa Ibom on December 23 reported sighting crude oil suspected to have leaked from Shell’s Bonga oil field in the Atlantic waters near the coastline.

It was gathered that the fishermen sighted the oil slick less than 20 kilometers from the shoreline and had assumed the spill emanated from Qua Iboe Oil fields until news of the spill filtered into the state.

Some coastal settlements in Akwa Ibom have reported sighting oil deposits and sediments of oil broken down by chemical dispersantants deployed by Shell to contain the spill.

Shell had on December 21 announced that some 40,000 barrels of crude leaked into the Atlantic Ocean from its Bonga deep offshore oil fields and subsequently shut down the facility.

Bonga field is located about 120 kilometres off Nigerian coastline.

A statement from Shell claimed that the spill incident had been contained but said another spill from a yet to be ascertained source sabotaged its clean up activities.

The statement signed by Shell’s spokesman Precious Okolobo said that remnants of the crude that leaked from Bonga had dispersed.

“The oil from Bonga had largely dispersed. However, around the same time as our efforts to clean up the Bonga oil offshore were coming to a successful conclusion, we noticed a clear trail of oil that we believe could not have been from Bonga. This trail of oil was fresh and clearly from a vessel given the distinctly different colour, shape and smell.

“As any good corporate citizen, we immediately began to address this fresh spill with dispersants. Unfortunately, our efforts were not completely successful and we now know some of the oil has hit isolated parts of the beach. Though this oil did not come from Bonga, we will clean it up.

“We have also taken samples of this oil which will be analysed by an independent lab. We are confident the results will show the oil on the beach or in these areas is not from the Bonga facility.” The statement read in part.

However, Environmental Rights Action/Friends of the Earth, Nigeria (ERA/FoEN) in a report released by its Executive Director, Nnimo Bassey said that oil from Bonga fields had reached the coastline in Odioama Community, Brass Local Government Area of Bayelsa State.

Bassey said that a visit to the impacted site by environmental monitors from ERA/FoEN with members of the impacted community showed that fishermen from the community have sighted oil deposits at the shoreline.

The environmental rights Non Governmental Organisation urged the federal government to conduct an independent investigation to ascertain the actual volume of oil that spilled from Bonga and compel Shell to pay adequate compensation to affected communities.