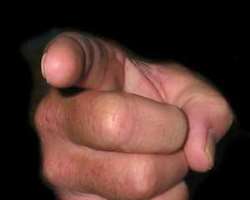 LET me begin this article by recounting the experience, observation and thoughts of a brother of mine who visited Great Britain recently. My brother, a well-educated Nigerian who rose to be principal of a secondary school, had spent the greater part of his life in rural Nigeria. He was so amazed at the cleanliness and orderliness of the British environment that he could not but wonder aloud what the situation could have been if Nigerians were to replace the British and vice versa. Nigerians, he contended, would in a matter of time, mess up their new environment while the British would transform Nigeria's crude one beyond imagination.

Professor Dora Akunyili, the Nigerian Information Minister, has been the driving force in the crusade to rebrand Nigeria. Various Nigerian television stations report her activities as her "campaign train" moves from one state headquarters to another. What she says with monotonous regularity is that "no one shaves another's head in his or her absence". This, in a sense, is an assumption on the part of the honourable minister that there is an "external conspiracy" to paint the image of Nigeria in negative terms. To rebrand Nigeria, therefore, is an attempt to sell to the world the true image of Nigeria.

If this interpretation of the rebranding agenda is correct, one makes bold to say that in all honesty Professor Akunyili has embarked on a fruitless expedition. The nations to which we are trying to re-present a new image have their missions in Lagos and Abuja. Their embassies are staffed with intelligent men and women who, on a daily basis, observe events in Nigeria and report back to their home nations. Going by what we ourselves know of our nation, their reports cannot be anything other than derogatory.

Even those visiting our country for the first time see the difference between civilisation and crudity on arriving at our airports. Dr. Reuben Abati wrote recently that airport toilets are not decent enough if they ever exist. Our airports also introduce to foreigners that the country they are visiting is one in which public officials beg openly for money and other gifts. Our airport officials had no qualms about asking anyone arriving in Nigeria what he or she had brought for them. This is a phenomenon one is unlikely to experience in any other country of the world.

The police could be seen at various check-points unashamedly collecting money from drivers of private and commercial vehicles. Most visitors have not seen anything of this nature before and no amount of propaganda will erode the impression they form from their observations. Corruption, crime and dishonesty are ills associated with our nation. Taxes are hardly paid, nor used for the benefit of the public. Religious or ethnic bigotry is unparalleled, not least in its crudeness.

Dora Akunyili was being rather too overzealous when she said she intended to crack down on those Nollywood artists who depict negative images of Nigeria in their films. One should remind our honourable minister that the film industry worldwide base their scripts on the history and culture of their various societies. Nigeria cannot be an exception. The Nigeria of today claims to be a democracy where we should be able to laugh at our follies in the belief that an honest critique of society makes the case for reform. Those of us who live outside Nigeria believe that Nollywood itself has helped the positive image of Nigeria better than the billions of naira heaped on lies and propaganda.

Can anyone today convince a reasonable American or European that Nigeria is the place for university education? Education is the cornerstone of societal development, yet the leaders we have in Nigeria pay mere lip-service to it. It takes an average of three years to finish a first degree in most universities of the world but this can hardly be guaranteed in those of Nigeria. Long strikes by lecturers mean it could take much longer in Nigeria. Periods of strikes see many university girls become prostitutes, while their male counterparts dabble in drugs and robbery. Is there anything to rebrand in all this?

Professor Dora Akunyili is undoubtedly one Nigerian to be admired. Patriotic and determined, she was one of the most efficient and effective public officers in the Obasanjo administration. She fought hard to take fake and expired drugs off the streets, an accomplishment that caught the eyes of the international community. She, indeed, has proved herself to be a great actor whose profile can only be diminished in the role of a propagandist.

Charity begins at home, so the saying goes. We Nigerians must first be proud of our nation and who we are before insisting on how the rest of the world should perceive us. Our energetic Minister of Information can redirect her efforts to educating our young ones on how to be responsible and honest citizens. The foundation of the Nigerian society is faulty; Nigeria needs rebuilding from scratch. Professor Dora Akunyili should be telling it straight to Nigerians all that is wrong about their society.