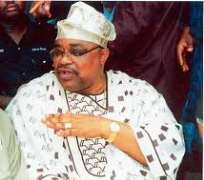 Former Governor of Oyo State, Chief Adebayo Alao-Akala, has described the public criticism of his administration by Governor Abiola Ajimobi as a clear indication that the governor lacked political experience, saying, 'he still need tutorial in the act of governance and we shall teach him how to behave as a mature politician.'

Akala, while speaking with journalists at his Ogbomosho country home on Christmas Day described himself as a statesman who would not criticize his successors in public, but would rather put such things in writing and pass it to them confidentially.

In his reaction to journalists' question that he should assess the last 250 days of Governor Ajimobi, the former governor replied: 'I am now a statesman by virtue of my previous position and by that, I won't criticize the administration as you want me to do. If I have any matter of interest, I know how to pass such to him in writing.

When reminded that the administration of Ajimobi had at several times faulted his policies while in office, he said, 'Ajimobi's criticism of my policies is a product of his being naive and inexperienced. To me there is nothing you can do without experience. We have been there before and we know the procedure. If you are a good politician, you will not do that kind of a thing. By all standards, I am supposed to be his senior, so he is not supposed to do that. But maybe he does not know. We will teach him how to behave as a politician.

'You don't criticize your predecessor in office like that, because one day you will also be an ex-governor. So, you should treat people the way you will want to be treated. If Ajimobi does not appreciate that, it means he does not know what he is doing. He is not yet a statesman. That is why he is behaving like that,' Akala declared.

On the on-going reconciliation within the Peoples Democratic Party (PDP) in the state, Akala said, it was aimed at repositioning the party for future challenges, specifically how to recapture the Southwest region in 2015. 'What happened in April has come and gone and we have all learnt our lessons. The on-going reconciliation is good as it would afford all of us to come together again.'

He stressed further that all aggrieved leaders of the party who are genuinely interested in the reconciliation process and returning to the party have been doing so, while assuring that at the end of the day, the party would be a stronger and larger family in Oyo State.

Speaking on the proposed removal of petroleum subsidy, Akala blamed the opposition to the policy on the failure of messengers who he said are not carrying the message appropriately, the way Nigerian masses would understand it: 'The issue has been blown out of proportion; the messengers of the oil subsidy removal are not carrying it well. But it is going to be very useful to the society and the downtrodden people of Nigerian in the long run.

So, they should allow this message to go the way it should. We have allowed money to be concentrated so much in the hands of few people in Nigeria. We may feel we are going to suffer in the beginning, but I am sure, it will benefit us all in the long run.'