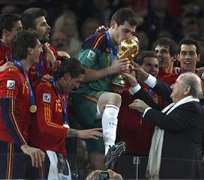 Spain remained top of the FIFA rankings and were acclaimed 'Team of the Year' for the fourth time running on Friday, while Wales, inspired by the work of their late manager Gary Speed, were declared the year's 'Best Mover'.

The world and European champions finished 2011 in a familiar position, ahead of the Netherlands and Germany in an unchanged top ten. Uruguay were fourth, England fifth and Brazil sixth with Portugal, Croatia, Italy and Argentina completing the leading group.

After an outstanding second half of the year during which they beat Montenegro, Switzerland and Bulgaria in Euro 2012 qualifers, Wales climbed to 48th position.

Speed, the architect of their renaissance, was found hanged at his home in November, aged 42, after barely a year in the job.

Speed took over after Wales's final fixture in 2010 and under his management the team rose from 116th in the rankings to a place in the top 50, gaining more ranking points - 330 - in 2011 than any other nation.

Bosnia-Herzegovina (20), Panama (49) and Estonia (57) earned their highest placings since the rankings began. The most dramatic leap of all came from American Samoa, who jumped 18 places to 186 thanks to winning a World Cup qualifier for the first time.