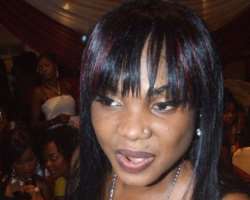 If what happened at the nominees' party of the Best of Nollywood Awards held at La Cachette Club, Ikeja, Lagos, is anything to go by, then the resuscitation of the industry by concerned practitioners and stakeholders would take a long time to come.

Apart from the presence of Funke Akindele, Iyabo Ojo, Ayo Badmus, who was busy chasing skirts after skirts, the rest of the actresses most especially the up and coming ones in the Yoruba genre are just hustlers.
There seems to be no difference between them and professional club girls with the way they behaved at the party. In fact, their conduct leaves much to be desired.

Their skimpy dresses were way out of this world. They drank recklessly and puffed stick after stick as if cigarettes were running out of fashion. When they cry that directors and producers are harassing them sexually, we bet it is the other way round from what happened at the gig. Aside the raunchy dance and smooching from different men who later took some of them home, they have constituted themselves as complete nuisance, desperate to become stars over night.