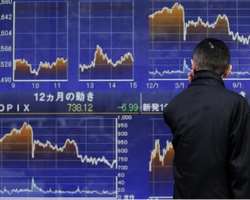 A MAN LOOKS AT A STOCK QUOTATION BOARD OUTSIDE A BROKERAGE IN TOKYO DECEMBER 12, 2011.
Listen to article

Stock markets and the euro fell on Wednesday, worried by record high borrowing costs for Italy and the Federal Reserve's decision to do nothing new to prop up growth despite warning Europe's debt crisis could hurt the U.S. economy.

The euro broke 11-month lows versus the dollar below $1.30 after Rome's auction of five-year debt, with foreign exchange markets still speculating that more rating downgrades were in prospect for euro zone governments.

"Uncertainties on the future of the debt crisis remain high and the market seems to be mainly driven by flight-to-quality this morning," said Annalisa Piazza, market economist at Newedge Strategy.

Italy paid a euro era record 6.47 percent on its new five-year bonds, compared with the previous record of 6.3 percent set in November.

Financial markets have been sliding since the start of the week as investors came to the conclusion that measures agreed at last week's EU leaders summit did not go far enough to resolve the two-year-old debt crisis.

Germany also sold debt, raising 4.2 billion euros at an auction of two-year bonds at average yields of 0.29 percent, compared with 0.39 percent at the last such auction. The German sale drew bids worth 1.4 times the amount on offer, up from 1.1 times at the last auction and the low yields illustrated how desperate investors are to find a safe haven for their money.

European shares slipped on concerns over the lack of Fed policy action with the FTSEurofirst 300 .FTEU3 index down about 0.65 percent. The heavyweight banking sector, strongly exposed to the euro zone crisis, lagged. The STOXX Europe 600 Banking Index .SX7P fell 0.7 percent.

The dollar index .DXY, which tracks the dollar's value against a basket of currencies, was off highs but still up around 0.7 percent at 80.30.

Oil and industrial commodity prices were mostly softer, with Copper falling to a two-week low, and Brent crude dipping 0.75 per cent to around $108.66 a barrel.

EURO FEARS
Economic data on euro zone industrial production in October reinforced the view that the region's economy is headed towards a contraction in the fourth quarter and beyond that into a new recession.

The influential Munich-based Ifo Institute said Germany's economy could lose momentum over the winter and would grow just 0.4 percent next year, as uncertainty over the euro zone crisis and a global economic slowdown prompts firms to invest less and weighs on exports.

The latest Ifo forecast was just half the previous estimate for 2012 growth of 0.8 percent, and reflects a sharp deterioration in the outlook even for Europe's biggest and most successful economy over the past few months.

The number of Britons out of work also rose to its highest level in more than 17 years in the three months to October, official data showed.

Meanwhile the region's banks tripled their demand for European Central Bank-offered dollars at the central bank's second weekly offering since slashing the cost of borrowing dollars, making the facility much more attractive to banks and easing funding woes.