Klitschko Out Of Defence 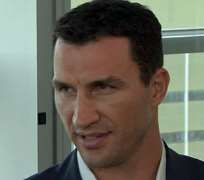 Wladimir Klitschko has been forced out of Saturday's heavyweight title defence against Jean-Marc Mormeck.

The WBA, WBO and IBF champion had a kidney stone removed at the weekend but it was initially hoped he would be okay to fight.

However, he was reported to be in 'extreme pain' on Monday and in no shape to go through with the fight in Dusseldorf.

Klitschko was scheduled to take part in his 20th world title fight against the Frenchman, who has had just three fights at heavyweight since losing his world cruiserweight titles to David Haye in 2007.

A press conference scheduled for later on Monday will still go ahead.