Eguavoen Resigns After Olympic Drop Out 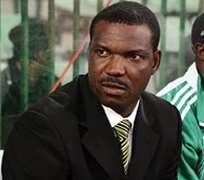 SAN FRANCISCO, December 4, (THEWILL) – Nigeria’s Under 23 team coach, Mr. Augustine Eguavoen, 46, has tendered his resignation as manager of the team after his rated ‘Dream Team V’ failed to qualify for the 2012 Olympic Games in London.

Eguavoen’s resignation caps a disastrous year for Nigerian soccer teams as Africa’s former soccer power house will have no representation in all graded FIFA approved championships for countries.

The Dream Team V crashed out of the qualifiers in Morocco suffering two defeats and managing only one win against Algeria.

“I hereby resign my post as coach of the national U23 team despite all the support I received from the NFF.

“I’m so sorry I couldn’t make it. I think it’s just honourable for me to resign after failing to meet the set targets,” the former Super Eagles Central Midfielder said in his resignation letter addressed to the football federation.

Nigerian representatives in the CAF Champions League and Confederation Cup, Enyimba and Sunshine respectively also failed to win African club championships after crashing out in the Semis.