IN ETHIOPIA, MICROFINANCE LIFTS POOR OUT OF POVERTY 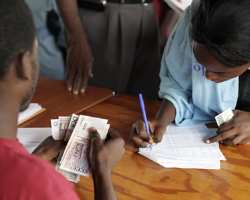 RECIPIENTS OF LOAN
Listen to article

At the outskirts of this town, 45 kilometres south of Addis Ababa, the Ethiopian capital, Aselefech Desalegn fights the flames she uses for baking enjera, Ethiopia’s staple flatbread. Like millions of poor Ethiopian women, she is also constantly battling to feed her children.

In recent years her livelihood has depended on supplying enjera to hotels in the town. “Except for the chair you see over there, all you see in the house comes from Buusaa Gonofaa,” she says, referring to the microfinance organization that has helped fund her home-based business.

Fifteen years ago Aselefech left her poor parents behind in a nearby rural settlement and moved to this town (which was previously called Debre Zeit). Since many rural families in Ethiopia harvest but once a year, it has become common for rural youth like Aselefech to either migrate to urban areas or even to Middle Eastern countries where they work as house maids.

After getting her first 500 birr (about US$30) loan from Buusaa Gonofaa seven years ago, Aselefech started selling charcoal and eggs on the side roads of Bishoftu. “Although I earned better than in my previous job as a cook in a hotel, I couldn’t resist the heat and rain on the street. The business also took me away from my kids,” she recalls. So after three years she switched to baking enjera and distributing it to hotels.

Aselefech is now among Buusaa Gonofaa’s regular clients, with access to $455 in loans, repayable at either 9 per cent interest over six months or 18 per cent per year. From the profits selling enjera, she can not only take care of her children, but also send money back to her family to help them obtain food and to fatten their cattle.

Microfinance institutions in Ethiopia give loans to poor people on a “group liability” basis, since the poor generally do not have property to use as collateral. Every member of such a group is liable for those who may fail to repay.

It was not easy for Aselefech to find enough people like her to form a group, since many people are not willing to take on liability for others. But Aselefech finally managed to form a group of 13 members. Each has different business ideas, but most buy goods from far away and sell them at a higher price near where they live.

Buusaa Gonofaa was established in 2001 and currently has 50,000 clients around the country. It gives out loans of up to $852 for individuals belonging to a group. Most are poor rural clients. “We increase the loan amounts to our clients by looking into their previous track records,” says Getachew Mekonnin, head of Buusaa Gonofaa’s marketing and social performance section.

Members of a group are expected to finish repaying their loans at interest rates ranging from 18 to 30 per cent per year. It is mandatory for clients to deduct a portion of their debt each week.

“Rural microfinance is still very new and has a lot of potential, given that the majority of people in Africa still live in rural areas,” say Mr. Ast. “One can be optimistic about the impact that innovative loan and crop or livestock micro-insurance products would have on smallholder farmers,” helping protect them against shocks like droughts or floods.


Some studies have recommended that the government allow foreign investors to provide microcredit in Ethiopia, as they do elsewhere in the world. That would mean scrapping a law that prohibits involvement in the sector.

Ethiopia’s severe inflation rate, which currently stands at around 40 per cent, is often cited as a major obstacle to the expansion of the country’s microfinance institutions. Industry players worry that this makes the real interest rate on deposits highly negative, discouraging savings and eroding the saving capacity of potential depositors.

About 3 billion people in developing countries have little or no access to formal financial services. But such access could be a powerful instrument for reducing poverty and enabling poor people to build their assets, increase incomes and reduce their vulnerability to economic stress. Formal financial services such as savings, loans and money transfers enable poor families to invest in enterprises, improve nutrition and living conditions and provide for the health and education of their children.

To meet that need, microfinance has been growing rapidly over the past 15 years, and currently reaches some 130 million clients worldwide. According to the World Bank’s International Finance Corporation, the global growth of microfinance has been driven by many factors, including the transformation of microfinance providers, the sizable supply gap for basic financial services, the expansion of funding sources and new technologies.

Many experts agree that when done responsibly, microfinance can have a significant development impact and improve the lives of people such as Aselefech. But other initiatives are also needed. “One would be naive to think that microfinance alone can eradicate hunger and poverty,” cautions Mr. Ast. “This is a very good tool to empower people, especially women. But it cannot be considered as the miracle solution.”