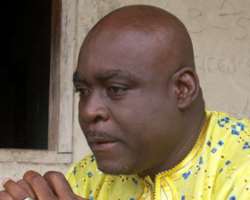 Kofi Adjorlolo is a renowned Ghanian actor who has been in the industry for about seven years.

He started as a radio and television presenter and later veered into acting in realization of his ambition. Kofi, as he's fondly addressed by his fans, was signed on as music artiste in Nigeria.

He played with notable artistes like, Victor Uwaifo and other popular artistes in Nigeria. In this interview, Kofi shares some of his high moments in the industry and his hope for the future.

Yet, not many are acquainted with the fact that you started as a radio/television presenter before you went into music and later the big screen. How has it been?

I became an artiste at the age of 11. As at that age, I was very good with the trumpet. I was a good musician while in school. Also, I was in the church choir too. So, at that early age, I knew there was an acting blood flowing in my vein.

But, I think what triggered it off was the experience I had when I travelled to Nigeria in 1977 during the Festac 77. I stayed in Nigeria till 1978.

During my stay in Nigeria, I had the opportunity to play music with the likes of Victor Uwaifo and host of others. I was signed on but I couldn't become an artiste due to my short stay in the country. Back home in Ghana, I played music for a while before going back into broadcasting.

But while I was doing that, I knew something artistic was in me. I was hoping and praying that one day, God would show me the way to live my dream.

How exactly did you come into the world of make-believe?

Honestly, I came into the industry by chance. My cousin, Richard Prempel, CEO of Village Communication, had a script on Taxi driver and he was having problems with the script, as well as the people handling the production.

So, he approached me to re-write the script for him. And I wrote about 12-15 episodes which turned out to be good. So, from there, I became part of the production and after few episodes, people commended our efforts.

There and then, I concluded that movie is actually what I was destined to do. That was how I started my acting in 2002.

How is the journey so far?

It has been fulfilling, as far as I'm concerned. If I were to be a civil servant till today, I would have been getting closer to my retirement. But here, I am still acting and even rated as one of the top actors in Gollywood. By the grace of God, I'm greatful and fulfilled.

Any endorsement to this claim?

Yes, actually, I remember I had the opportunity to receive the Best Loyal Actor award in 2006 in Ghana. Also, I was nominated for AMAA awards as Best Actor supporting role. In that category, we had people like Justice Esiri, Enebeli Enebuwa and Jide Kosoko.

So, it was a very high moment for me to be nominated in that category with such caliber of actors. And since then, there has been a boost in my acting career.

Do you have any low moment?

My low moment in the industry comes when producers don't reciprocate the kind gesture extended to them by us as actors in terms of remuneration. Secondly, sometimes when I read some stories about myself on the pages of newspapers that are not true.

What is your take on the movie industry in Ghana and Nigeria?

In fact, most of the movies we are producing in Ghana today starred many Nigerian actors and actresses. As a matter of fact, Tonto Dike is in this very film. We are presently shooting as well as Mercy Johnson. Jim Iyke and Ramson just left our country a few days ago. Even, the director of this production is a Nigerian.

They come to Ghana to shoot movies as we also go to Nigeria to shoot movies too. We are in a collaboration, so to speak, at the moment. Movie business in Ghana and Nigeria shares a lot in common. Nollywood and Gollywood are like two sesames twins

You have sojourned in the industry for about seven years now. How would you describe the growth of the movie industry in Africa?

Measuring the standard of the film industry in Africa, in comparison to Bollywood and Hollywood, we are not there yet. The entertainment industry in Africa generally is witnessing the break of a new day at the moment.

Film industry, as we know, is a very big industry. It carries a lot of messages. It promotes culture and so much more. But the industry is still a baby when compared to Hollywood. It is still growing.