AT SILVERBIRD, IT'S A NEW WORLD FOR CINEMA 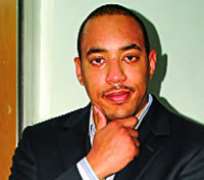 • Murray Bruce
Jonathan Murray-Bruce belongs to the family of showbiz operators. He is currently the Executive Director at Silverbird Galleria in Lagos. Murray-Bruce who takes delight in the business of entertaining people told Daily Sun recently that part of his mission is to spread cinema houses across Nigeria.

He spoke on vision of Silverbird Galleria and other issues.

It is my responsibility to run our cinema business in Nigeria and to ensure that we get good films from our distributors. I'm also responsible for sustaining and maintaining the look and feel, expanding the business and making sure our movie goers are happy and satisfied.

We have the largest cinema chain in Nigeria with 34 screens spread across five locations; we show hundreds of films a year, and serve hundreds of thousands of customers per year and we are still growing.

Silverbird Distribution acquires the rights to distribute movies from their studios/producers to the cinemas within their territory. They negotiate the contract terms and assist with publicity for their films. Silverbird Cinema is an exhibitor who exhibits films received from distributors(SBD being one of them).

Why we reject certain movies at Silverbird
It is all based upon the economic benefits that each film is projected to bring to the table. Silverbird does not reject films. Silverbird Film distribution like any other cinema distributor in the world can preview and give advice on films meant for cinema and the ones meant for DVD release. We choose the films that we feel will be the most appealing to our audience. Let it be noted that even abroad not all movies make it to the big screen.

Relationship between Silverbird and Nollywood
Some people have said that Silverbird does not support Nollywood. It's not true. As a matter of fact, we have increased our viewings of Nollywood movies. During the last six months, we have exhibited a minimum of two Nigerian movies every month and if all goes well, we plan to do more. In addition, we assist with some of the publicity for the films exhibited at our cinema . Silverbird Cinemas will occasionally showcase a Nollywood movie through red carpet premiers like they do in Hollywood.

To date, we are proud to say that we have exhibited and premiered a number of successful Nollywood films. The fact that we publicize these movies through our media branch gives us an advantage over our competitors. Silverbird believes in Nollywood and we hope to establish an even better relationship with the community from now and into the future.

Plans for the future
We plan on expanding our cinemas across Nigeria and beyond the Nigerian soil. For example we set to open a new cinema in Ikeja this year, and we are in the process of upgrading to digital projection technology. So the vision is to expand our cinemas all across Nigeria.

As for the entertainment industry generally believe that Nigeria needs Entertainment as much as Entertainment needs Nigeria. So Silverbird will play a big part in being the guiding light as this industry explodes in the future.