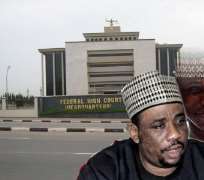 SAN FRANCISCO, November 22, (THEWILL) - A federal capital territory, FCT high court has summoned the clerk of the National Assembly, Alhaji Abubakar Salisu Maikasuwa and his House of Representatives counterpart, Mr Mohammed Ataba Sani-Omolori to appear before it tomorrow, Wednesday November 23, 2011 over the on-going trial of the former Speaker of the House of Representatives, Hon. Dimeji Bankole and his deputy, Usman Bayero Nafada, who are facing a 17-count criminal charge before the court.

The trial judge, Justice Sulaiman Belgore issued the order to the two top management officers as well as the Director of Finance of the National Assembly, Mr Bukoye Lasisi following complaints by the prosecution counsel, Festus Keyamo that the NASS officials were under pressure from some powerful interests not to fulfil their initial commitment to stand as witnesses in the case.

Speaking from the bar, Keyamo had said “My lord, I want to put it on record that those who were supposed to come as witnesses are developing cold feet. Specifically, the clerk of the House who was one of the witnesses you signed their witness summon this morning, from available information they are being pressurised not to give evidence in this court.”

The court order entitled “summons to witness” was issued by Justice Belgore to compel the listed witnesses to appear before the court tomorrow. The judge said the summon was issued based on the complaint by prosecution that the witnesses will not voluntarily appear, stressing that “it appears to me that by the proof of evidence that you are likely to give material evidence therein on behalf of the complainant and will not voluntarily appear for that purpose.”

At the resumed hearing of the matter on Tuesday, an official of the Revenue, Mobilization Allocation and Fiscal Commission, Salaries Wages and Incomes Commission, Samuel Naziga, a deputy director in the Allocation unit of RMAFAC revealed the package approved for the Speaker and others members of the House. He also said that his organization does not know anything regarding any running cost for the lawmakers.

Documents brought by another witness, Ibrahim Ahmed were twice objected from being tendered by the defence counsel, Tayo Oyetibo SAN and Wole Akanni but were however admitted in evidence by the trial judge, Justice Belgore. The defence had objected to the admissibility of nine bundles of documents which comprise requests seeking information from several government agencies and organizations as well as their responses.

The matter has been adjourned to Wednesday November 23 when the summoned officials are expected to appear to take their turn in the witness box.

Recall that when the case came up on Monday, two witnesses, Adeniyi Adebayo and Ibrahim Ahmed led by prosecution counsel, Festus Keyamo, gave testimonies explaining how the Bankole and Nafada- led House approved the increment and took a loan of N42billion from two banks to fund the increment. Besides, the witnesses said that Dimeji and Nafada diverted the excess accruing from the loan into their personal accounts.

One of the prosecution witnesses, Ibrahim Ahmed, an EFCC investigating officer told the court that United Bank of Africa, UBA, and First Bank were the two banks that funded the illegal increment. He said the first loan taken from UBA without recourse to due process was a N10 billion which was rolled over thrice and another N12 billion from First bank.

Ahmed told the court that upon investigation, letters were written to the Clerk of the National Assembly, the Revenue Mobilization Allocation and Fiscal Commission, Salaries Wages and Incomes Commission, the Secretary to the Government of the Federation, SGF, UBA plc and First Bank of Nigeria plc with regards to the allegations.

He further told the Court that another letter was written to the Clerk of the NASS to provide the minutes of meeting held by the principal officers of the House, Internal memos between the Clerk and the then Speaker concerning the loan collected from UBA and First Bank, Payment schedule sent to the bank from the House, agreement(s) between the House and the Banks and any House resolution concerning the loan matter.

Ahmed also told the court that because the tenure of Bankole led administration was nearing its end and the facility was yet to be repaid, UBA held unto the allocation of the House from the Federation account; which starved the house of funds, a development that led to the last loan of N12 billion taken from First Bank.

Besides, he said that the increment the members unilaterally did was not captured in the 2010 budget and as such there were great discrepancies between figures given by the Revenue Mobilization Allocation and Fiscal Commission and what the House paid members.

Ahmed also said that the decision to obtain the said loan was taken at the guesthouse of the former Speaker (Dimeji Bankole) with him presiding; adding that investigation also established the total lawful quarterly allowances accrued to each member from the Office of the Accountant General of the Federation.

The duo of Bankole and Nafada were arraigned on Monday, June 13, 2011, on a fresh 17-count charge of criminal breach of trust, misappropriation and theft.