House Against Withdrawal Of Customs From Borno 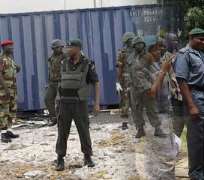 
ABUJA, November 22, (THEWILL) - A few hours after, Senator Ali Ndume from Borno state was arraigned in court in connection with the Islamic sect, Boko Haram, the House of Representatives today turned down a motion seeking to stop officers and men of the Nigerian Customs Service [NCS] from conducting inland patrols but concentrate on manning the nation's borders in view of the volatile security situation in the state.

While leading debate on the motion titled, “Need to check the activities of Custom officers in Maiduguri and other major towns in Borno State,” Hon. Mahmud Lawan Maina argued that the people of the state were exposed to incessant harassment, and impounding of vehicles as well as extortion by customs men.

Maina had urged the House to direct the Comptroller-General of customs to discontinue their inland patrols and such other activities and focus more on manning the nation’s borders.

He said there have been recurring complains by resident, including traditional rulers from the state and urged the House to also mandate its Committee on Customs to investigate the alleged harassments, and report back in four weeks.

Hon. Khadijat Bukar-Abba Ibrahim in her support for the motion alleged that Customs officers in the area had abandoned their primary responsibilities and were now engaging in stop and check operations, which, according to her was duplicating the operations of the police and the army.

Others who supported the motion were Hon. Peter Akpatason and Ali Madaki.

But opposing the motion, Hon. Nkem Abonta (PDP, Abia) argued that inland patrols were operations meant to ensuring that the right levies and duties on goods were being paid by traders, suggesting that what the affected traders needed was cooperation by members of the public, paying and obtaining the relevant receipts to serve as defence when confronted by the officers.

Another member, Hon. Benjamin Aboho (ACN, Benue), rejected the motion arguing that the prevailing security situation in Borno State called for extra caution in making any call to withdraw the checkpoints, stating that, such agencies work to complement other security agencies deployed by the government to the area to safeguard lives and properties of the citizens.

In his submission, Hon. Friday Itulah argued that such stop and check operations would help in checking illegal influx of arms, noting that it would be counterproductive to withdraw the Customs officers.

Meanwhile, the House has urged the Federal Ministry of Works and the Federal Road Maintenance Agency [FERMA] to immediately take concrete steps towards fixing the federal road leading to Calabar, the Cross Rivers state capital.

Adopting a resolution following a motion brought by Hon. Nkoyo Toyo, the House also mandated its standing committee on Federal Road Maintenance Agency [FERMA] to take immediate steps to address the needs of the Tanker drivers, restore hope to the suffering populace of Calabar, and assure the state that the Calabar festival month will not be jeopardized after huge investments have been made into this year’s festival.

She maintained that tanker drivers have been protesting the deplorable state of Calabar-Itu federal road and its consequential impact on business into and out of Calabar.

“Cross Rivers state has invested its meager resources in sustaining the road over the last four years but due to the torrential rainfall, that effort has not been adequate to arrest the deteriorating state of the road which is further exacerbated by its use by heavy duty vehicles,” she said.

“ As a result of the deplorable state of the road and its total collapse, tanker drivers supplying petroleum products to the state have gone on strike to protest the poor state of the road and their inability to carry on business given the number of hours and sometimes days, they spend on the road of less than 50 kilometers.

“We are concerned FERMA has failed to act to bring the much needed succour to sections of the road that are badly affected and has left the state in a situation where business is being paralyzed and great hardship caused by the disruption of normal economic activities in the state,” Hon. Nkoyo stated.